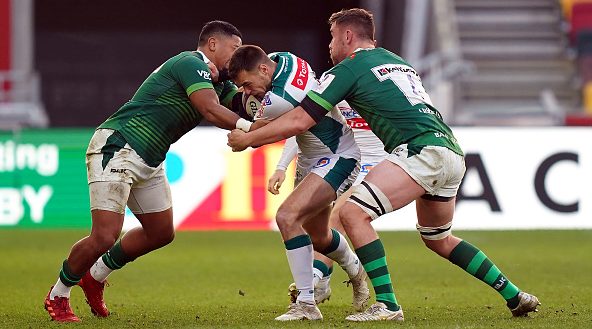 Despite neither Castres Olympique nor Pau currently sitting in the European Rugby Challenge Cup knockout stage qualification places, they both boast players near the top of the competition’s offloads chart after two rounds.

Onambele Mbarga has proven a valuable asset for Castres since his move from fellow French side RC Toulon in the summer.

With five offloads in just two matches and having missed just eight minutes of his side’s campaign so far, there is surely more to come from the 27-year-old.

Joining Onambele Mbarga on five offloads is Pau fly-half Debaes, with the 19-year-old looking incredibly accomplished during the opening two rounds despite his tender age.

He also crossed the whitewash for the first time in Europe last month, scoring a try against London Irish that augurs well for the future.

A player with plenty of pedigree in both the Challenge Cup and Heineken Champions Cup, North has chipped in with four offloads for the Welsh region during the opening two rounds.

The Wales back is already a Challenge Cup winner with Northampton Saints and will no doubt be looking to add a second success in the competition, with Ospreys handily placed in second spot in the preliminary stage table.

Relentless and incisive in attack, @ospreys added a delightful fifth try late on in Round 1 🤩

Stephen Myler with a pitch-perfect grubber and it's @lukeymogz with a superb pick up and finish 🙌#ChallengeCupRugby pic.twitter.com/F6UwwmXD61

It didn’t take long for Hayward to make an impact in this season’s Challenge Cup, scoring a try and being named man of the match in his side’s 44-20 Round 1 win over Stade Français Paris.

Having also chipped in with three offloads, the Italy back will no doubt play a major role throughout the rest of the competition.

Rounding off our top five is veteran Argentina hooker Creevy, who joined London Irish from Worcester Warriors in the summer.

So far this season he has only featured in his side’s win over Pau in Round 2 but still rattled off three neat offloads and will be a powerful attacking threat no doubt as the competition progresses.