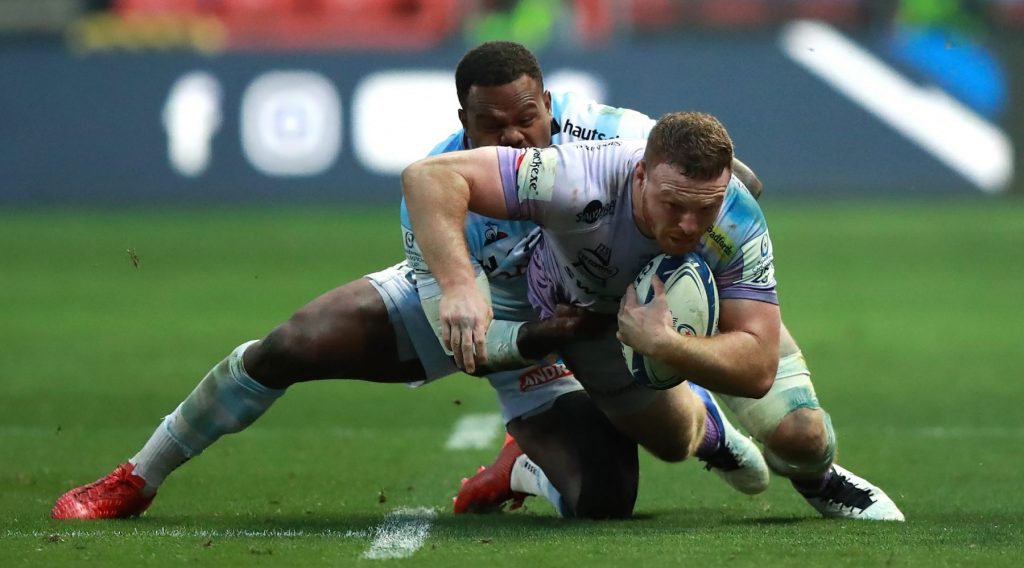 Exeter Chiefs, Sale Sharks and Wasps were all victorious on the opening weekend of the Gallagher Premiership as the Heineken Champions Cup hopefuls got their domestic seasons underway.

Chiefs showcased the imperious form that secured them a European and domestic double last season with a 33-3 victory over fellow Champions Cup hopefuls Harlequins.

England international No.8 Sam Simmonds stole the show with a hat-trick of tries as the reigning Champions Cup winners moved to the top of the early Premiership table with a bonus point victory.

AJ MacGinty rounded-off the Sharks’ try-scoring with a 60th minute finish – adding nine points with the boot – as Sale moved to third with a bonus point triumph.

Wasps overcame Challenge Cup winners Bristol Bears 23-20 as both prepare for the upcoming pool stage of the Champions Cup.

A late Tom Willis try – his second of the game – with just two minutes left on the clock was the difference between the two sides at the Ricoh Arena.

Both Bath and Gloucester suffered defeat in the opening weekend of action. Gloucester fell 38-15 to Leicester, with Bath losing out 19-12 to newly promoted Newcastle Falcons.

The #GallagherPrem is back and some things never change 😍#EPOTY2020 @samsimmonds_ was outstanding, grabbing a superb hat-trick as @ExeterChiefs cruised to victory 🙌

We can't wait to see him in #HeinekenChampionsCup action again 🤩https://t.co/Z5BhDRSfU2

Over in France, Champions Cup runners-up Racing 92 lost a close contest against European rivals and Top 14 leaders La Rochelle 9-6 – New Zealander Ihaia West with all nine points for the victors.

Challenge Cup runners-up RC Toulon – who enter the Champions Cup this season – were beaten 35-29 by Bayonne thanks to 25 points from the boot of full-back Gaetan Germain.

Bordeaux Bègles were also in action over the weekend, falling 26-16 to Stade Français at the Stade Jean-Bouin despite 11 points from the boot of Ben Botica.

In the PRO14, Leinster Rugby continued their dominant form with a 40-5 mauling of Cardiff Blues. Scott Penny touched down for two late tries – taking his domestic tally to 5 for the season.

Connacht Rugby dispatched of Zebre in emphatic fashion with a 47-12 as they prepare for their Champions Cup campaign. The Irish side rumbled over for seven tries in the rout, Tom Daly and Alex Wootton both scoring a brace in the victory.