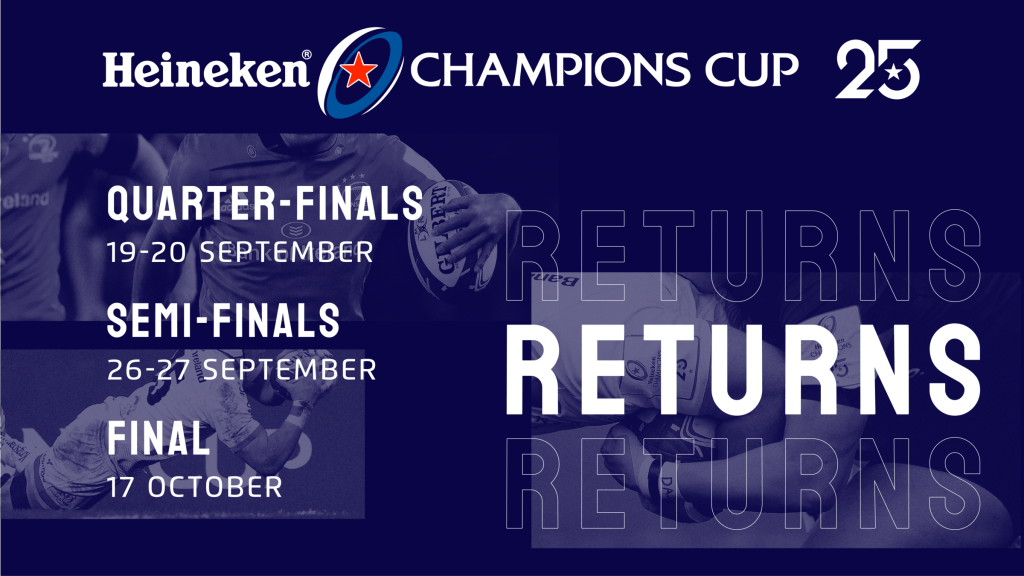 Get ready for the return of the Heineken Champions Cup!

After eight long months in the wilderness, Europe’s elite club competition returns with a bang next week as the quarter-finals of the Heineken Champions Cup get under way.

Europe’s elite eight take to the field in the competition for the first time since January, in what is set to be a tantalising weekend of action.

Saracens finished second in Pool 4, securing the No.8 seed and face the daunting task of overcoming the powerhouse that is Leinster – who topped Pool 1 with six wins from six. BT Sport and beIN SPORTS have coverage of the game which kicks off at 15:00 (all UK and Irish time) on Saturday 19 September.

ASM Clermont Auvergne and Racing 92 take centre stage soon after in an all-French affair at the Stade Marcel-Michelin in Clermont-Ferrand, kicking-off at 18:45 and televised on BT Sport, France Televisions and beIN SPORTS.

The #HeinekenChampionsCup quarter-finalists are gearing up and showing some serious form 👀@UlsterRugby pulled off a stunning comeback to join @leinsterrugby in the PRO 14 final while @ASMOfficiel beat @StadeToulousain in a TOP 14 thriller 🏉https://t.co/ucNxLVTcrV

Toulouse then host Ulster as the second half of the quarter-final schedule gets underway on Sunday 20 September – televised on BT Sport, Channel 4, Virgin Media, FR2 and beIN SPORTS from Le Stadium at 13:30.

The French side topped Pool 5 with six wins from six in the group stage of the competition, but will face an Ulster side who are battle-hardened and used to close contests – four of their five Pool 3 wins were won by a converted try or less.

Exeter top the Gallagher Premiership and have been in emphatic form since the competition returned in August, including a 22-19 win over their quarter-final opponents Northampton.

The Chiefs also topped Pool 2 after an undefeated campaign, and face the Saints who finished second in Pool 1 behind the all-conquering Leinster.