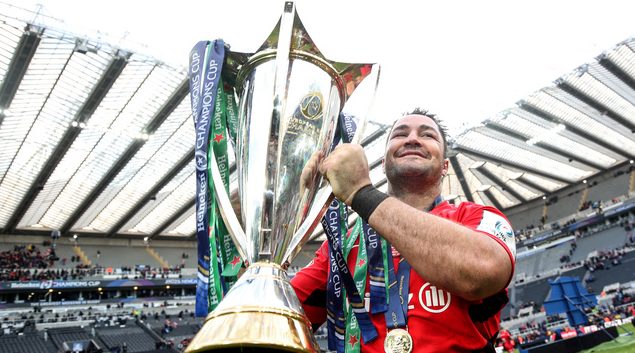 Saracens captain Brad Barritt has targeted retention of the Heineken Champions Cup as one of his aims before leaving the English club at the end of the 2019-20 season.

The former England centre’s contract at Allianz Park was due to end in the summer, but he has renewed it so that he can play in Sarries’ rearranged Gallagher Premiership games, the Champions Cup quarter-final against Leinster Rugby in Dublin and any future ties in the competition should his club progress.

“I’m excited and delighted to announce that I’ve signed a contract extension until the end of the 2019/20 season,” the 33-year-old three-times Champions Cup winner told the Sarries website.

“But I’m also sadly going to announce that this will be my last season with Saracens. I have had an incredible stay here of 12 years. There have been so many memories, so many experiences, but sadly all good things must come to an end.

“I’m immensely excited to finish off the season. To still have the Champions Cup as a goal and focus point for us is immensely exciting. I also want to hopefully sign off on a positive note and enjoy these last few months as a Saracen.”

Since arriving in north London in late 2008, the South African-born Barritt has played 65 European games for Saracens, with all but three coming in the European Cup, and scored seven tries.

The centre has been there for all of the club’s five Premiership and three European successes. Furthermore, he has skippered the team to the last three domestic titles and all of those Champions Cup triumphs since taking on the role during the 2015/16 season.

Saracens director of rugby Mark McCall commented: “Brad’s agreement to stay with the club until the conclusion of the 19/20 season is outstanding news.

“He has been a central figure in the development of our club for more than a decade and a truly great captain for the last five years.

“We are delighted that Brad will have the opportunity to end his time with us in the manner he so richly deserves.”