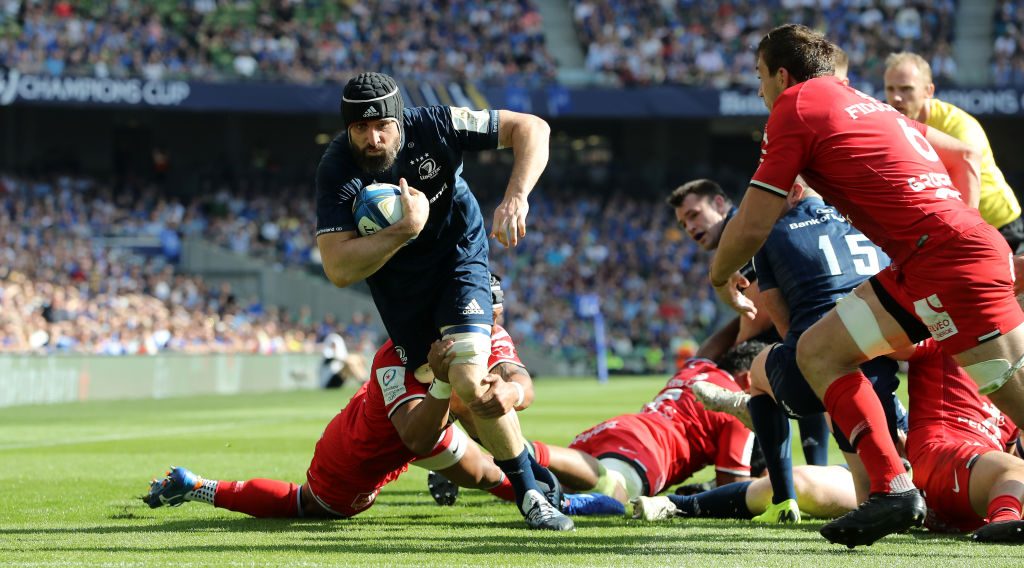 With the Heineken Champions Cup Rewind showcasing the epic 2006 Heineken Cup quarter-final between Toulouse and Leinster Rugby, we have taken a look back at the trio of clashes between the two sides last season, including a semi-final to remember in Dublin.

It was the French side that came out on top in the first meeting of the season with a 28-27 victory over the defending champions at Stade Ernest Wallon.

The home side enjoyed a terrific start and went six points clear when full-back Thomas Ramos knocked over two early penalty kicks and went further ahead when Julien Marchand broke clear of the Leinster line before play eventually found Maxime Medard who was able to dot down in the corner.

The two sides then began to trade penalties until the defending champions found a way to get over the whitewash when Jack Conan exploited a hole in the Toulouse line and sprinted clear before a simple hand-off to Sean O’Brien who dived over.

Toulouse hit back just before half time after some unbelievable footwork from Sofiane Guitoune who broke past a pair of Leinster defenders with a delicious step and sauntered over the try line. Ramos would drill the conversion between the posts to give the French side an eight-point lead at the interval.

Two tries in quick succession from James Ryan and Sean Cronin gave Leinster the lead early in the second half but Toulouse would again bounce back through the in-form Medard.

Toulouse intercepted in midfield and with four incisive passes they found Medard who bolted clear for a huge try. Ramos then nailed the crucial conversion to put the French side in front, a lead they would sustain till full-time.

Sensational scenes at the full-time whistle as the champions have been defeated! 👏 pic.twitter.com/QxyjElM1sf

Leinster leapfrogged Toulouse in Pool 1 after a 29-13 victory at The RDS in Round 5.

The home team started on top, with a Sean Cronin tackle resulting in Leinster attacking the Toulouse line until play was broken up but advantage was being played. Ross Byrne slotted between the posts for the opening score of the afternoon.

The first try came soon after as Leinster moved the play wide right and then back inside to Jack Conan who powered past two Toulouse men and over the try line. Byrne’s conversion split the posts to give the home side a seven-point cushion, but Ramos narrowed the gap with a late successful penalty kick.

Shortly after the interval, Ramos failed to fully clear away and that gave Leinster the chance to continue the attack and punish the French side.

Byrne played a delightful cross-field kick to perfection, allowing Dave Kearney to attack the ball and stay in play while dotting down for the second try.

Pressure continued to pile on Toulouse and they eventually gave way as Leinster went over for the third time through Sean Cronin.

The bonus point was then brought up as replacement Jamison Gibson-Park fired a ball wide to Adam Byrne who scored in the corner with ease.

Adam Byrne gets the bonus point try for Leinster in their dominant performance against Toulouse at the RDS.

Tries from wing James Lowe, scrum-half Luke McGrath and flanker Scott Fardy sent Leinster into another Heineken Champions Cup final after beating a Toulouse side who battled hard but could not take advantage of possession in the Leinster 22 throughout the match.

The visitors made the better start and won an early penalty at the breakdown in kicking range for full-back Thomas Ramos, who made no mistake in handing Toulouse a three-point lead.

Five minutes later, the French side were penalised when prop Charlie Faumuina failed to roll away and Leinster fly-half Johnny Sexton duly levelled the scores with a simple penalty in front of the posts.

New Zealander Lowe then bagged yet another try in the Heineken Champions Cup on 13 minutes. The hosts worked the overlap to perfection out wide and found Lowe, who burst past two Toulouse defenders to dive over the try line.

The visitors were reduced to 14 men after 24 minutes when Richie Gray was sent to the sin bin and seconds later Leinster scored a second try, McGrath touching down under a pile of players after an effective line-out and driving maul from the defending champions.

However, Toulouse finished the half strongly and Ramos cut the gap by kicking a simple penalty between the posts to make the score 17-6 at the interval.

That was as good as it got for the visitors, though, as after nearly five minutes of sustained pressure from Leinster at the start of the second half, they got a crucial third try.

Australian Fardy – who replaced Rhys Ruddock in the side just two hours before kick-off – powered past the final Toulouse defender to dot down and leave the visitors with a mountain to climb.

Toulouse’s Romain Ntamack trimmed the Leinster lead with an easy penalty, but Heineken Man of the Match Sexton – who kicked 12 points in the victory – slotted over another three-pointer on 65 minutes to restore their winning advantage.