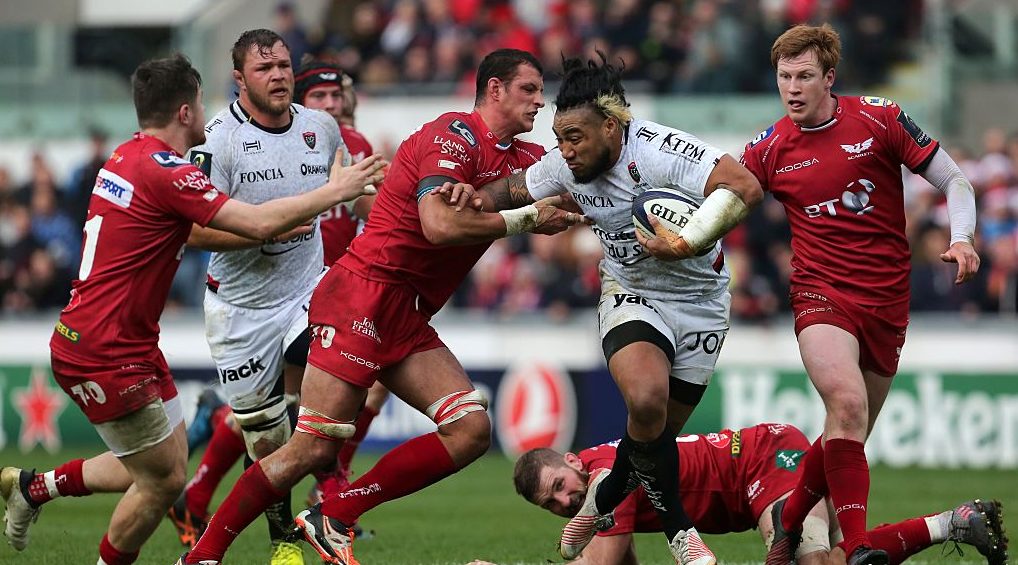 Scarlets and RC Toulon only had their first European meeting in 2010, but they have been regular opponents since in both competitions. Here we pick out five of their most notable matches.

Toulon cruised into the semi-final of the Challenge Cup with a five-try win over outgunned Scarlets.

Jonny Wilkinson kicked 13 points against Stephen Jones’ 12, but it was Toulon’s superior strike power that counted as Clement Marienval notched a brace of tries either side of the break.

The French side had the greater strength in depth and stretched away with late tries for Jeremy Sinzelle, Sonny Bill Williams and Olivier Missoup.

Toulon’s bid for a historic third successive European Cup crown began with a scrappy win against battling Scarlets in France.

Matt Giteau’s opening try for the hosts was cancelled out by John Barclay rewarding a team score.

Maxime Mermoz then scored from the restart and Steffon Armitage put the result beyond doubt.

Scarlets showed determination with a late try through Kristian Phillips, but Toulon held on.

Scarlets claimed a famous win over Toulon in their Champions Cup clash in Llanelli.

Against a below-par French side, Scott Williams, Hadleigh Parkes, Rhys Patchell and Ken Owens produced stand-out performances as man of the match Williams scored the game’s only try in the first half.

The rest of the home side’s points came from Patchell’s conversion and five penalties as Leigh Halfpenny nailed seven kicks of his own. The Wales full-back kept Toulon in the game and could have won it in the final minute, but his long-range effort fell short.

It meant the home side came out on top by the narrowest of margins, the Parc y Scarlets crowd going wild at the final whistle as they celebrated one of the best results of Wayne Pivac’s tenure.

This week we've got a Welsh wonder to watch 😍

A stirring Scarlets comeback from 18-0 down proved in vain as Toulon eked out victory in their opening match in Champions Cup Pool 5.

Toulon got off to a flyer, going 15-0 up after a quarter of an hour, Eric Escande intercepting an Aled Davies pass to run in, then Guilhelm Guirado adding another after a Anthony Belleau penalty.

It was then 18-0 after another Belleau penalty, but a Leigh Halfpenny penalty gave the Welsh side a glimmer of hope by half-time.

Scarlets were back within a point after Johnny McNicholl crossed and then Halfpenny – back at his old club – scored a try after some slick interplay, which he converted to reduce the arrears to 18-17.

Halfpenny completed the comeback with a further penalty, but Francois Trinh-Duc did likewise to restore the hosts’ slender one-point lead. They held on to it, surviving by virtue of a missed Halfpenny penalty late on.

Anthony Belleau was RC Toulon’s hero as he kicked a last-gasp conversion to leave Scarlets with only a losing bonus point to show from a thrilling Challenge Cup tie between Pool 2’s leading two teams.

Despite being reduced to 14 men on the stroke of half-time after a red card for lock Tevita Ratuva, the Welsh region led 16-10 going into the dying seconds following a superb second-half display, which brought penalties for Ryan Lamb and Dan Jones, who also dropped a goal.

However, the pressure of being a man light finally told in the eighth minute of stoppage time, when Toulon’s backs and forwards combined to maul their way over the line 10 metres in from touch.

Sébastien Taofifénua was eventually credited with the try and up stepped centre Belleau to land the ultimate pressure kick, albeit with the help of a post.