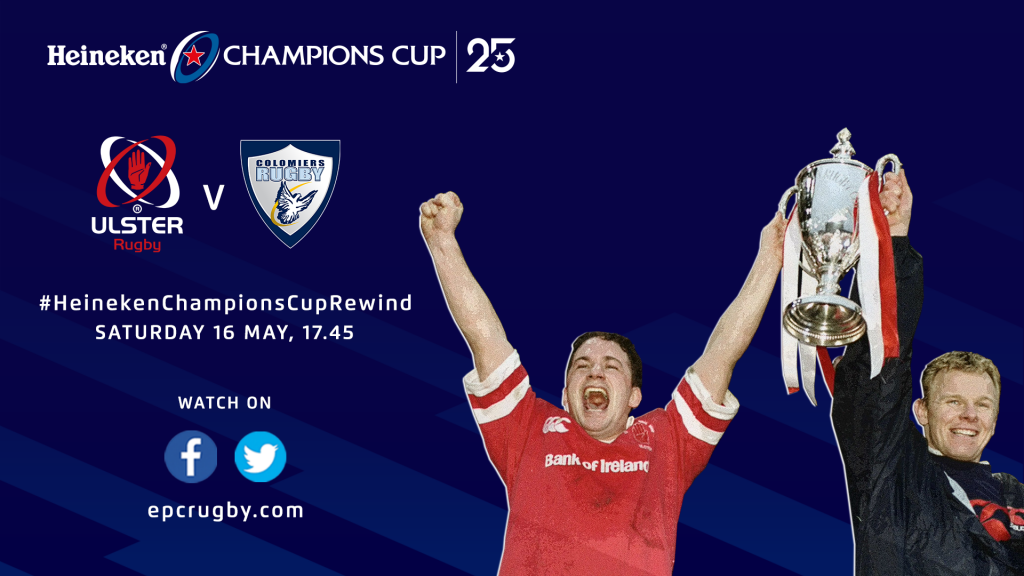 This Saturday our Heineken Champions Cup Rewind series will put the spotlight on the 1999 Heineken Cup final between Ulster Rugby and Colomiers, with the match being shown exclusively on ChampionsCupRugby.com.

The clash would provide a first Irish success in the competition, with Toulouse, Brive and Bath winning the first three editions of the Heineken Cup. Simon Mason was the Ulster hero as he kicked 18 points in a 21-9 win at Lansdowne Road.

You can again watch all the ‘pre-match’ coverage on Saturday from 17:15 (UK and Irish time) on our live blog, with the match stream from Dublin getting underway at 17:45.

This match will be the sixth of our Heineken Champions Cup Rewinds to be shown on ChampionsCupRugby.com and our various social media feeds.

Relive the one that went down to the wire as @BOPBweb hosted @ospreys, both sides full of stars and flair 🤩#HeinekenChampionsCupRewind provided by @btsport, the home of live European club rugby 🏉 https://t.co/e26G0GaaMZ

Previous Heineken Champions Cup Rewind have seen record amounts of European rugby fans tune in to our channels to relive European classics such as the 2011 Heineken Cup final between Leinster and Northampton as well as the Miracle Match from 2003 and Clermont’s semi-final victory over Leinster in 2017.