The best of Biarritz in Europe 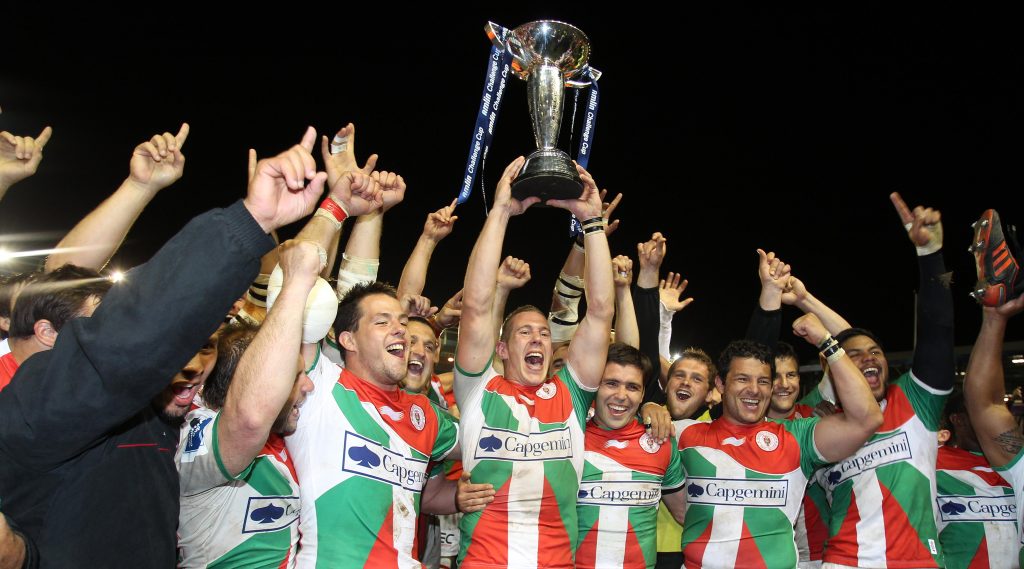 With Biarritz Olympique’s famous 2010 Heineken Cup quarter-final against Ospreys the focus of this weekend’s Heineken Champions Cup Rewind, we take a look back in time at five of the French’s sides biggest matches in European Rugby.

It was third time lucky for Biarritz as Dimitri Yachvili produced a quality display of goal-kicking against Bath to clinch a spot in the Heineken Cup final.

A first half dominated by the hosts ended 9-6 but Bath’s dreams of emulating their 1998 victory were shattered by Yachvili’s unerring boot.

His metronomic kicking nudged Biarritz six ahead and the margin became nine when Damien Traille slotted a drop goal.

Bath cut the gap to six again as the clock ticked down with a Chris Malone penalty but it was left to Yachvili to hammer home the advantage and a spot in the showpiece final with his fifth successful penalty kick.

Munster finally got their hands on a first European crown as they edged past Biarritz 23-19 in a tense Heineken Cup final at the Millennium Stadium.

Ronan O’Gara and Dimitri Yachvili had an intriguing kicking battle in which neither missed a kick and the Biarritz scrum-half shaded 14-13 on points, but Munster consistently kept their noses in front.

Neither side could produce a try in the second period but a 74th-minute O’Gara penalty sealed the deal for the Irish province in front of a Munster-heavy crowd in Cardiff.

Memories of that game? 👀

Biarritz got their revenge on Munster for that 2006 victory with a commanding 18-7 win over the Irish province to set up an all-French Heineken Cup final against Toulouse.

Munster started brightly and Keith Earls’ try helped the Irish side take a 7-0 lead by the 28th minute but the French side came roaring back thanks to some accurate kicking from Dimitri Yachvili.

His penalties on either side of half-time cut Munster’s lead to only a point and as Biarritz’s pack dominated the remainder of the contest, scrum-half Yachvili kicked four more three-pointers to give Biarritz a comfortable nine-point winning margin.

Toulouse clinched a record-breaking fourth Heineken Cup to break Biarritz hearts again in a dramatic final at the Stade de France in Saint-Denis.

The Basque side took a 9-3 lead through three Dimitri Yachvili penalties to one for Toulouse from Florian Fritz but two David Skrela penalties and a Fritz drop-goal put Toulouse 12-9 up at the break.

Yachvili levelled the scores after the interval but two drop-goals and a penalty from Skrela saw Toulouse edge close to what would eventually prove to be a winning score.

Karmichael Hunt’s late converted try set up a nail-biting finish, with Biarritz launching a series of attacks, but Toulouse held out to become the first four-time champions of Europe.

Biarritz finally ended their European final pain with Challenge Cup final success as Dimitri Yachvili kicked all 21 points to give them a narrow victory over RC Toulon at Twickenham Stoop.

In a match played in driving rain, it was the kicking that proved crucial as Yachvili landed all seven of his penalty attempts, with four of them coming in an opening period that ended with Biarritz 12-9 ahead.

Toulon fly-half Jonny Wilkinson kept his side in the match with five penalties of his own in addition to a drop goal that made the tie 18-18 with 14 minutes left to play.

But Yachvili had the final say with another sweetly struck penalty kick in the 74th minute that proved to be the match-winner.