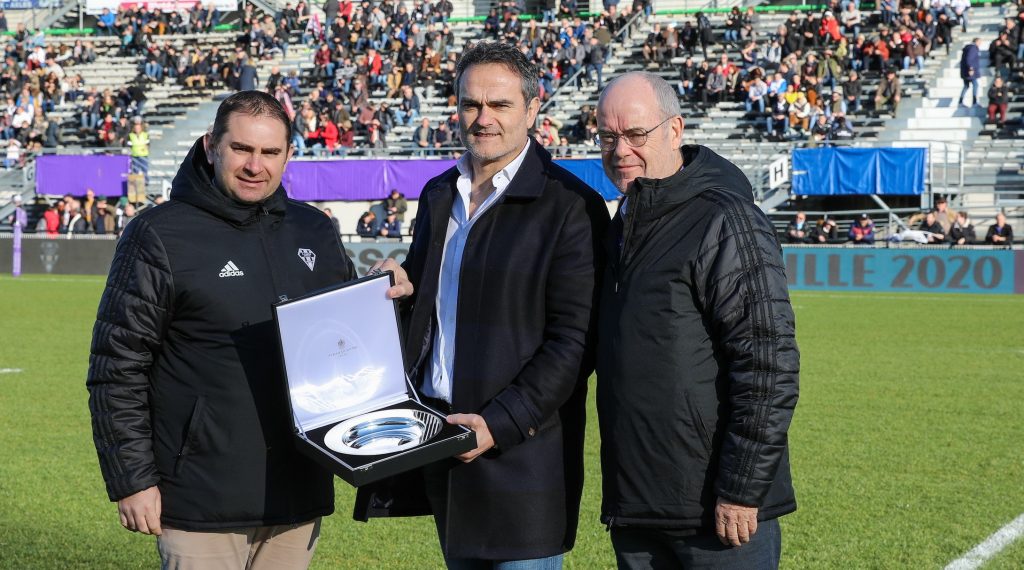 Alain Penaud, captain of the successful 1997 Brive side, receives a silver salver from EPCR, presented to all the winning clubs of the Heineken Champions Cup

As the 25th final of the Heineken Champions Cup approaches – there are now only 100 days to go to that prestigious May date in Marseille – Alain Penaud, who captained Brive to victory in the 1997 decider, looks back at the French club’s outstanding 1996/97 campaign.

Twenty-three years on, the 50-year-old former France fly-half still has strong memories of those seven wins from seven matches, climaxed by their 28-9 drubbing of Leicester Tigers in the final in Cardiff.

“The strongest is certainly the moment when we lifted the cup,” he said.

“But a lot of images flash by, because it was such an incredible event. There are also the celebrations in Brive, which were magnificent. But I also think of the players, with whom I had some unforgettable moments.

“The British clubs certainly appreciated the European Cup better and regarded it as a major competition. For our part, we were setting off on an adventure and didn’t want to deny ourselves the pleasure.

“We made it a major objective as the matches went on, when we realised we were doing well on the pitch. Our appetite grew as we progressed.”

“The cohesion between us was natural,” he explained.

“There was an osmosis, a mix of seriousness, serenity and complete insanity that made our days together exceptional and unique. It was a time when we would rush into the changing rooms to share positive craziness together. This created a rather exceptional atmosphere within the squad.

“We went through the campaign with a kind of carefree attitude, without dwelling too much on this or that opponent. There was such strength in our squad.

“There was a very powerful feeling of envy against us. But it’s a matey sport first and foremost and we felt like we could knock down mountains. In 1997 Leicester represented the Everest of rugby and we channelled that fear.”