Connacht ready for the challenge 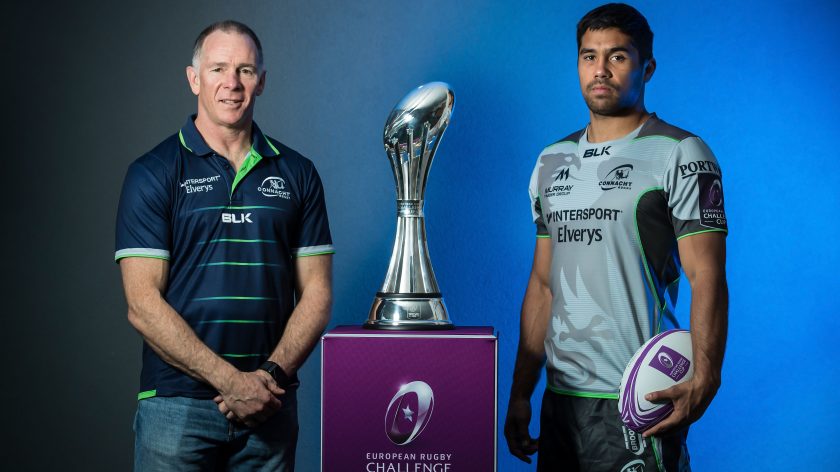 Connacht Rugby head coach Andy Friend is looking forward to the prospect of competing “against teams from other nations” in this season’s European Rugby Challenge Cup.

The Galway outfit have played the most matches in the competition’s history – 121 games across 18 seasons – but have yet to reach a final.

“The Challenge Cup offers new challenges,” said the 49-year-old. “It’s always good to challenge yourself against teams from other nations. We have that opportunity, but Bordeaux-Bègles is going to be a tough start for us.

“They had a good win recently against Clermont, so we know that they’re a quality side and we’ll have to play our best game at The Sportsground if we want to beat them.”

The Australian was appointed in charge of the Irish province at the end of the last season and is pleased with his team’s start to their Guinness PRO14 campaign.

“We’re four games into the season and we’ve had two wins and two losses, which is probably a fair reflection in terms of where we’re at the moment, but it’s been really good,” he continued.

“I think the team’s in a good spot, we’re starting to see the energy and the support we’ve got from the Connacht supporters, and it’s good to get wins at The Sportsground.

“From a squad point of view, it’s been really impressive to see the ambition of the squad and their desire to want to push themselves and to learn.”

The former Harlequins head coach has prior experience of St James’ Park – where the Challenge Cup final is being held – as he took his assistant at the time, John Kingston, for a weekend away in Newcastle.

“I do know that city well, only because when I was with Harlequins, we played there against the Falcons and the assistant coach I worked with, John Kingston, was a Newcastle United fan. I took him there for a weekend away, which was pretty special and memorable,” he recalled.

“The final being in Newcastle is special for the competition and it would be great to play on that surface.”

Jarrad Butler, the newly-appointed captain of Connacht, is eager for the competition to get under way and wants to be lifting the trophy come next May.

On leading the team, the New Zealander said: “It’s been a crazy couple of months I suppose, but it’s been exciting.

“I’ve definitely been learning on the fly and I’ve got some great people that have made the transition so much easier: coaching staff and players alike, we have a lot of leaders in our squad. To be able to rely on them has been a massive part of it.”

The back-rower is set to lead his side in Pool 3 against Sale Sharks, Bordeaux-Bègles and Perpignan, and sees the competition as a “massive opportunity”.

“It’s just exciting,” the 27-year-old said. “It’s a different competition, you get to wear a different jersey and play some teams that you usually wouldn’t play against throughout the year.

“We also had a fair bit of success earlier on last season with the European Challenge Cup as well, so we see it as a massive opportunity to play well, keep building and hopefully go a little bit further and win the thing.”