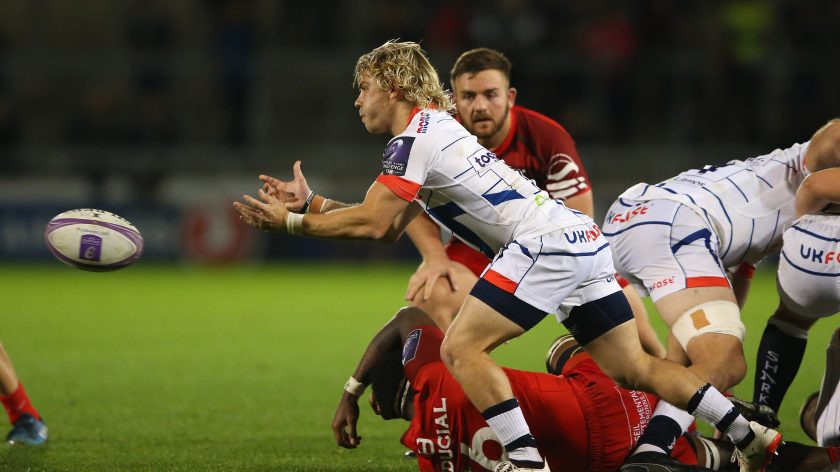 After Sale Sharks scrum-half Faf De Klerk’s delightful performance for South Africa in their 42-39 Test-match victory over England on Saturday, we take a look at some of the other No. 9’s that will be lighting up next season’s European Rugby Challenge Cup.

31-year-old scrum-half Danny Care enters his 13th season with Harlequins as he attempts to guide the Twickenham Stoop club to a fourth Challenge Cup success.

He last enjoyed victory in the competition back in 2011, when he helped Harlequins past Stade Français Paris in a nail-biting final (19-18) at Cardiff City Stadium.

The England international has an excellent record in European rugby, racking up 22 tries from 73 appearances including five tries during Harlequins’ run to the Challenge Cup final in 2016.

Three-time European Cup runner-up Morgan Parra has become the heartbeat of the ASM Clermont Auvergne over the last decade with his dynamic passing and creativity.

A Challenge Cup finalist in 2009 with Bourgoin, Parra has an exemplary record in European Rugby having amassed 507 points from 79 matches.

Known in France as the petit général due to his leadership on the field for club and country, Clermont are likely to be eager to put their stamp on the competition and make it all the way to finals weekend in Newcastle.

📚 All the details that you need when it comes to the Challenge Cup pool draw for the 2018/19 season. The draw will take place on Wednesday 20 June and will be streamed live on our channels.

28-year-old scrum-half Alexi Balès was a mainstay in La Rochelle’s maiden Champions Cup campaign last season, winning Pool 1 before being knocked out of the tournament by Scarlets (29-17) in the quarter-finals.

The dynamic former France youth international played a crucial role in La Rochelle’s outstanding attacking rugby in the opening rounds of this season’s Champions Cup, as they blitzed Harlequins, Ulster Rugby and Wasps in successive matches.

He had his most productive campaign last season, scoring 34 points from seven matches and can be expected to increase that tally in next season’s Challenge Cup.

Ospreys scrum-half Aled Davies will make his first appearance in the Challenge Cup next season after joining from fellow Welsh region Scarlets who have featured exclusively in the European Cup since 2012.

The 25-year-old appeared seven times in Scarlets’ run to the Champions Cup semi-finals last season, including a substitute appearance in their 38-16 last four defeat to Leinster Rugby in Dublin.

The Welsh international will be keen to feature heavily for Ospreys next season as they attempt to reach the semi-finals of a European competition for the first time.

26-year-old Kieran Marmion has made the scrum-half role his own at the Irish province since making his Connacht debut in 2012.

He averages a try in European rugby every three matches, including three during Connacht’s run to this season’s Challenge Cup quarter-finals, before being knocked out by eventual finalists Gloucester Rugby in Galway.

With Marmion having scored a try in every European campaign for Connacht since 2013, expect another exciting campaign from the Ireland international.