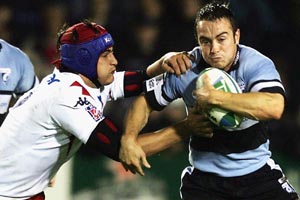 Xavier Rush aims to take Cardiff Blues into the upper tier of Europe's club rugby game by steering his side to the final eight of the Heineken Cup for the first time. - 19/07/2007 11:01

Xavier Rush aims to take Cardiff Blues into the upper tier of Europe’s club rugby game by steering his side to the final eight of the Heineken Cup for the first time.

Rush, 29, has been re-appointed Blues captain, having led the side with aplomb last season after Rhys Williams relinquished the role.

“We have a pretty even group in the Heineken Cup, where a lot of the teams can beat each other,” said Rush. “But we want to get through to the next stage of the competition.”


The Blues will face Bristol, Harlequins and Stade Francais in Pool Three of the Heineken Cup next season.

Top 14 Champions Stade Francais Paris will be a major obstacle for the Blues as the Parisien side have qualified for the knock-out stages seven times. The only previous meetings between the sides was during the 2004/05 Heineken Cup Pool stages when Stade were victorious on both occassions winning 38-15 away and 35-16 at home.

Rush’s side had a disappointing campaign last season, managing just two wins in the group stage against French side Bourgoin. Yet Rush is confident his side can launch a strong challenge this year after a second place finish in the Magners League.

“We said at the end of last season when we were challenging for the Magners League that we were definitely not the complete package yet,” said Rush.

“I think we’ve been steadily climbing the ladder and our performances have been improving.

“We’re about 20% off where we need to be to challenge the top teams. But we’re ready to push on and try to get some silverware this year.”