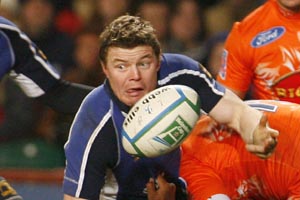 Brian O’Driscoll has been re-appointed Leinster captain for the third consecutive year.

The 28-year-old skipper has earned 45 caps for Leinster in the Heineken Cup and has amassed 100 points in total. The centre is on target to be awarded an ERC Elite award during the 2007/08 season for 50 Heineken Cup appearances.

Brian O’Driscoll said: “I am honoured to have been asked to lead Leinster over the coming season. Leinster is my home province and I believe that there’s an enormous amount of excitement around the club at the moment; with the impending return to the RDS coupled with some new signings who will no doubt add great competition for positions right across the panel.”


Up to 18,000 Leinster fans will be at the redeveloped RDS to witness the much anticipated Heineken Cup Pool matches against the 2007 Heineken Cup finalists Leicester, triple Heineken Cup champions Toulouse and last season’s Pool rivals Edinburgh.

Meanwhile, Leinster will travel to face 2006 Heineken Cup finalists Biarritz away on the 31 August (KO: tbc) before embarking on a week’s long training camp in Barcelona prior to the start of the new season.

The camp will conclude with another mouth-watering fixture against Bath in The Recreation Ground on Friday, 7 September (KO: 6.30pm).