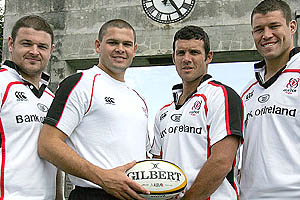 Former Ulster player Seamus Mallon who has returned to the province after two seasons with Northampton Saints is glad to be back at Ravenhill and added that it was “always my ambition to return”. Seamus spoke of how being away from the province and his time at Northampton have changed him : “I am definitely coming back a more mature person and a more mature rugby player and hopefully a wee bit better player than when I left. We have an influx of new players and a new assistant coach so there is a bit of a buzz around the place.  I have worked with Steve (Williams) at Northampton and he will bring good communication skills, good man-management and build a good relationship between staff and players. He is a really good, honest coach and I’m looking forward to working with him again.”


The former Bourgoin player and Italian lock Carlo del Fava said the “transition from Bourgoin to Ulster has been very smooth and professionally handled. Ulster needed a lock and I needed a good solid club to go to as there were a lot of changes going on at Bourgoin and I wasn’t playing regularly with Italy. I want to get my Italian shirt back and my aim is to get into the 30-man squad for the World Cup”. Ulster will be hoping to get lots of information about Bourgoin from Del Fava in preparation for their Heineken Cup Pool 2 clashes.

Steve Williams who joined up with the Ulster camp this week spoke of his ambitions for Ulster when he said :
“I have been giving a great opportunity to work with a well renowned team and excellent players. We must be positive and confident as we have good enough players to compete with the best.  I have certain ideas on what I want the players to do and my job is to bring out the best in them”

Mark McCall said this of Williams :

“For us, it is a fresh voice with new ideas and it is good for us to get a fresh take on things, everyone who has worked with Steve has a high regard for him as a person and he is held in great respect by those he has coached. Looking ahead, we will have options throughout the team and big competition for places next season so people are going to have to play very well to get into the team and that is a healthy situation.”