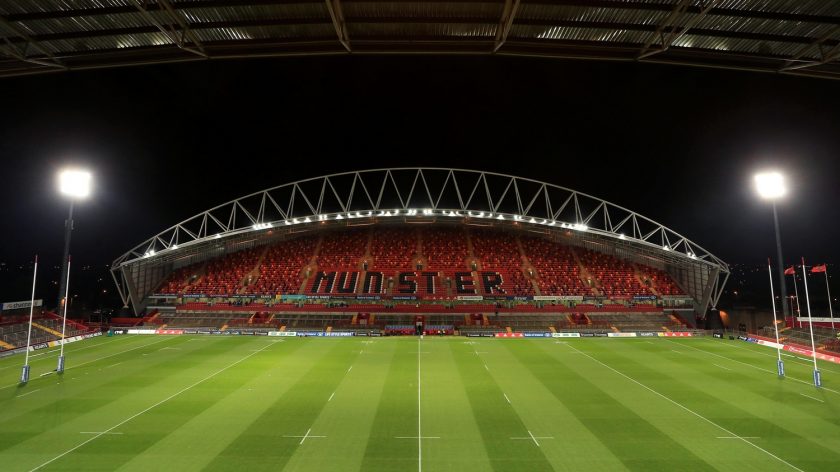 Munster Rugby will play their 2007/08 Heineken Cup Pool games will action in Thomond Park. Munster have released an update on plans for its new stadium in Limerick which is on target for completion by August 2008.

It is proposed that the three ERC Heineken Cup home pool matches will be played there in November and December 07 and January 08. North, South, East and West Terraces will provide standing accommodation and there will be a limited amount of temporary covered seating provided behind the East Terrace. The North and South goal line uncovered seating will remain, bringing the capacity to just over 12,000 for Munster’s home fixtures.

Munster’s Magners League home fixtures will be played at Musgrave Park in Cork.

The Munster Branch has a rolled out a comprehensive commercial programme to support the funding of its new stadium in which it has a total investment of circa ?43 Million. The key components of this programme include;

The 10 year ticket scheme proved to be a huge success for Munster with the 2,500 tickets available sold out to fans following the launch of the scheme in January 2007. 10 Year Ticket holders will be in a position to avail of their grandstand seats on the stadium’s completion in Autumn 2008.

The new stadium will have 20 Corporate Boxes accommodating 15 people each.

Already there has been significant advance interest in these boxes. They will initially be made available to sponsors of Munster Rugby and any remaining boxes will come on offer and be allocated in the Autumn.

Sale of Naming and Founding Partner Rights The sale of naming and founding partner rights has been a commercial requirement and critical source of funding for many stadia around the world in modern times and the Munster Branch intends to market the naming rights for the new stadium. In addition to the principal naming rights it will also market a number of category sponsors for the stadium including the beer, soft drinks and concert rights.

“It is widely acknowledged that Munster must move with the times to ensure that we continue to be a major force in European rugby into the future. It has been a courageous and necessary move to, dream of, plan for and ultimately develop a new rugby stadium in Limerick for all of Munster Rugby.

It will provide our players and our supporters with the finest of facilities and be a ground of which all of us in Munster Rugby, players, supporters and administrators, can be proud. The stadium will reflect the standing of our team, our supporters and our brand throughout Europe and re-enforces our commitment to the very highest of standards both on and off the field.

With regard to funding for the stadium, the total capital costs will be in the order of ?43 Million, and we must meet this investment from a variety of sources, Advance Seat Sales, borrowings and our commercial programme, which will include the sale of naming rights and various other category sponsors.

This is the reality the world over in modern sport and we in Munster want to be trail blazers when it comes to providing facilities for our supporters and players.”

The key feature of the new stadium will be the symmetrical grandstands on the East and West sides of the new stadium. The span of the main roof support truss for the new stands will stretch to 146 metres making it a new and unique landmark for Limerick city.

Construction work is underway on the foundations for both East and West Stands with priority being given to the East Stand construction which will be the main facility.

West Stand foundations are currently being prepared and the existing West

Terrace has been demolished and removed. The new West Terrace construction

will commence within the next week and will be completed by October 2007.

The main facility at the East Stand will house corporate boxes, two suites, three private lounges and the Supporters Club Bar with food and beverage services provided across all facilities.

The West Stand will house a suite of changing rooms at ground floor level, including a function room on the upper Level B.