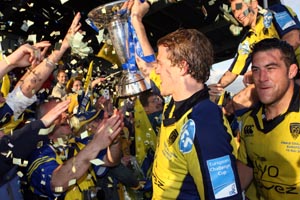 The European Challenge Cup 2007 / 2008 draw for the composition of the five Pools of four teams each was made today (Friday, 22 June) in the Dublin offices of ERC, the tournament organisers.

With Spain returning to European competition for the first time since the 2004 / 2005 season, 20 teams from six nations – England, France, Ireland, Italy, Romania and Spain – will compete for the European title.  Each side will play six group stage matches with the five Pool winners and three best runners-up advancing to the knock-out stages.


All 20 teams taking part next season have played in Europe before, Dax are back after last being involved in the European Challenge Cup in 2001 / 2002, while current Spanish champions Cetransa El Salvador previously competed in the tournament three years ago.

The draw, which was overseen by IRB Head of Rugby Services, Mark Egan, sees Bath Rugby face two French and one Italian club in their bid to go all the way to another European final on the weekend of 23 / 24 / 25 May, 2008, while No 1 French seeds Montauban face English, Italian and Romanian challenges.

“We have retained the same successful format of the last two seasons of the European Challenge Cup and following today’s Pool draw we are looking forward to another highly successful competition,” said ERC Chairman Jean-Pierre Lux.

“ASM Clermont Auvergne – who have qualified for the Heineken Cup – and Bath Rugby produced a thrilling European Challenge Cup final at the Twickenham Stoop last month and the tournament again promises to provide plenty of top quality and high intensity European rugby.”

Irish province Connacht – who have played a record 71 matches in 11 seasons in the tournament – joined Bath Rugby, Montauban, Rugby Calvisano and Bayonne as the five seeded teams.