Davies on the move to Brive 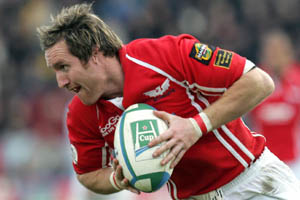 Barry Davies has completed his move from the Scarlets to French outfit Brive.

Full-back Davies was released from his contract at the West Wales region and has confirmed he will head to the 1997 Heineken Cup winners.

Davies leaves after seven seasons at Stradey Park and as the leading try-scorer in the region’s four-year history.

Carmarthen-born Davies, 26, said: ”Hopefully, I will now finish my career in Brive.

”I don’t want to keep switching sides and would be quite happy if I just played for the two clubs over my career.

“Simply the offer I had from Brive was a different world compared with the money I could earn over here. When you throw in the lifestyle, the decision was a no-brainer.”

But the one-time capped star still refuses to give up on his international ambitions and hopes the move across the English Channel can resurrect his Wales chances.

He added: ”I wasn’t getting much of a chance with the national team and I had been at the Scarlets for seven years.

“I just felt I needed a change. Maybe it will make that bit of difference to push me back into the Wales fold.

“I haven’t given up with Wales. If I am consistent with Brive, and the club are doing well, who knows what will happen?”