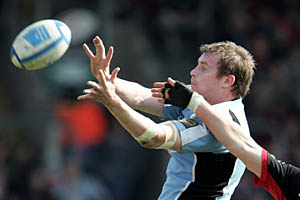 
The Glasgow Warriors will have branding rights for the 10,887 capacity, all-seated stadium in Glasgow’s West End. The deal also enables the Warriors to run and manage all their events at the stadium directly, including match operations and hospitality.

Glasgow Warriors captain, Alastair Kellock, said: “Firhill is a great facility and the deal is much like the one that The Ospreys have at Liberty Stadium, which I think was a huge factor in helping them win the league.

“We have some good, fast runners in our squad for next season so the surface will be a major benefit to us as well as the fact that we will be playing in Glasgow.”

Top Irish seeds Leinster Rugby confirmed that their home Heineken Cup games for the 2007/08 season will be played at the 18,000 capacity Royal Dublin Society’s (RDS) grounds in Ballsbridge.

The 2006 Heineken Cup champions Munster have confirmed that they will play all of their home Heineken Cup games at Thomond Park for the 2007/08 season.