We can win treble next year – Corry 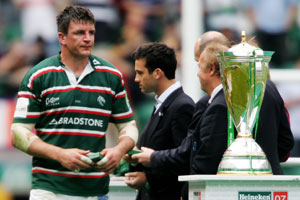 Leicester captain Martin Corry rallied his weary Leicester troops by declaring they can attack the Treble next season and now they know what they have to do. - 21/05/2007 20:58

Leicester captain Martin Corry rallied his weary Leicester troops by declaring they can attack the Treble next season and now they know what they have to do.

He admitted his team came up short on the final leg of their historic treble bid. They were well beaten in the Heineken Cup final after earlier clinching the Premiership and EDF Energy Cups.

“It gives us something to aim for next season,” said Corry. “We know the treble can be achieved and we know how tough it is.

“Eventually I believe this club will do it. The club does not need motivation, every time you pull on the short it is a proud moment.

“Everyone at the club wants success and as players we have had a little bit this season, but we will want more next season.”

Corry accepted they had been outplayed by London Wasps in the Heineken Cup final, but did not believe it was a game too far for his side as they battled for their third trophy.

“We knew what we had to do to win it, but unfortunately we fell short,” said the No 8.

“We aim high, we set our stall out at the start of the season and when we look back I am incredibly proud to be captain of such a wonderful club.

“When you look back at the season we answered a lot of critics beating Munster, Stade Francais, Llanelli – when you look at small pockets there are a lot of reasons to put a smile on your face but unfortunately when you look at the bigger picture we came up short.

“You do not want this to overshadow the whole season but unfortunately at the moment it probably does.”