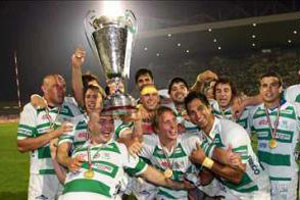 Benetton Treviso qualified for next season’s Heineken Cup as No. 1 Italian seeds by winning the Italian championship on Saturday.

The team from the north-easternmost corner of Italy defeated Viadana 28-24 in the Super 10 final to clinch their 13th Italian title.


Treviso will now compete in the Heineken cup for a fifth successive season, with the hope of ending their two-year winless streak in Europe’s premier club competition.

This year they were pooled with French heavyweights Perpignan and Castres Olympique and eventual Heineken Cup winners London Wasps, failing to record a victory in a tough group.

They have won just 14 of their 54 Heineken Cup games since their bow in 1995 – but have scored 215 tries to show they have the ability to trouble teams in the top tier of European rugby.

Italy will have two representatives in next season’s Heineken Cup. Despite their Super 10 final defeat, Viadana will joining Treviso as Italy’s second seed.