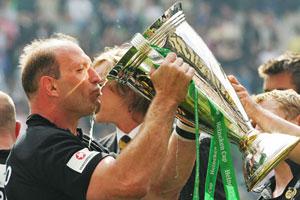 London Wasps skipper Lawrence Dallaglio lifted the Heineken Cup trophy and said: “We targeted this win from the start of the season!”

Dallaglio led Wasps to their second European title with a 25-9 lead win over favourites Leicester and said: “To win this competition once is fantastic, to win it twice is something else. It showed what we’re about as a club.

“Leicester have had a fantastic season, but we targeted this competition at the start of the season and we’ve won it. They’ve won their two trophies because they haven’t been put under any pressure.

“The only way you win these games is if you believe you can win. We had the belief in our team and that’s half the battle against Leicester.

“We showed a maturity in the way we played, and to make sure that Leicester didn’t score a single point in the second half shows what we’re all about.

“We haven’t got the buying power of Leicester, but what we have got is soul in our team, and that’s why we’ve stood toe to toe with them in Europe.

“Often finals are a letdown, but this one was anything but. I’m glad everything’s been sorted out for next season because the Heineken Cup is a great competition.”

Director of rugby Ian McGeechan added: “We talked about doing something different at the lineout and both things worked.

“Alex King did well out there – he’s a clever thinker and he makes the team tick. He’s a great role model for our younger players.

“There’s a very special atmosphere among all the people in this squad.”

Defence coach Shaun Edwards said: “We changed our defence a bit and it worked like a dream. They didn’t get a point in the second half.

“Paul Sackey and Tom Voyce have been criticised for their defence, but I thought they were immense. I think this win has to be one of this club’s greatest achievements.”