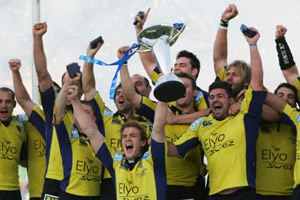 ASM Clermont Auvergne scrum-half Pierre Mignoni says winning the European Challenge Cup is important for the development of his club as they strive for future European glory.

Mignoni was a pivotal figure as his team bought the silverware back to France by beating Bath 22-16 in Saturday’s final at the Twickenham Stoop, and now believes his side can grow to be a leading light in the French game.


Their European Challenge Cup triumph grants them automatic passage to next season’s Heineken Cup, and with the semi-finals of the French Championship still to be played this season, the future for the club so often in the shadows of near neighbours Toulouse and Perpignan looks bright.

“This is my first title and obviously I’m really happy,” Mignoni said.

“We could have scored tries in the first half but we let chances go and didn’t finish things as we would have liked, so to have come back in the second half and make good on our opportunities is really satisfying.

“This was a really open game and the thing which made the difference between us winning and going home disappointed today was our determination not to let any opportunities go and to play until the final whistle.

“That is a massively important lesson for us to take on into the final stages of the French Championship and to help us develop as a team.”