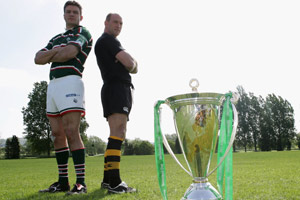 If Leicester captain Martin Corry was allowed to pick his dream Heineken Cup final then the Tigers would obviously be in it - and London Wasps would be the opponents. - 18/05/2007 12:48

If Leicester captain Martin Corry was allowed to pick his dream Heineken Cup final then the Tigers would obviously be in it – and London Wasps would be the opponents.

The England No 8 admits there is a history between the two clubs who have regularly clashed at the top of the game in England and in the Heineken Cup. However this will be the first all-English Heineken Cup final and Twickenham will be the perfect venue.

.  It all makes Corry relish the opportunity to secure an historic treble that way against great rivals in the English game.

“We have got history, we are two very passionate sides which is what you want. If I was planning a Heineken Cup final then as long as Leicester were there then who would I want to play against? I would want to play Wasps,” said Corry.

“It is more than just another game, but we are not looking at the record books. This is a Heineken Cup final against Wasps and if you start looking at anything else then you start taking your eye off the process of going out and winning the game.

“Things have gone well so far but we have to make sure that this improves on what has happened in the previous weeks and months and galvanises our performance on Sunday. 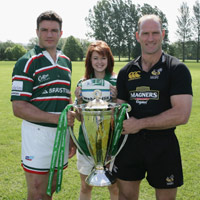 “It is a club game, a full house at Twickenham, it will be absolutely fantastic. There is a lot of history between the two and that all adds to a better spectacle.”

The two clubs have dominated in England over the last decade and they share a common approach and focus.

“In domestic and European rugby there are no two games the same which makes it really interesting. But if you look at Wasps you could say our style of play is similar, the styles of character are fairly similar as well,” admits Corry.

“I am sure Wasps will have a few tricks up their sleeve and so will we and that will make it interesting, but you can talk about history and everything in the past but it a question of whoever plays the best rugby on Sunday will win.”