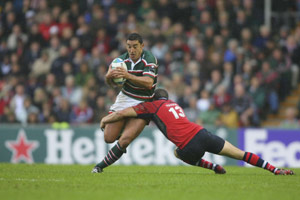 Glasgow Warriors centre Daryl Gibson is warning the Scottish team's Pool 4 opponents to write them off at their peril. - 08/01/2008 14:05

Daryl Gibson returns to the Tigers starting line up for this Sunday’s Heineken Cup Final against London Wasps at Twickenham (kick-off 2.30pm).

The former All Black centre replaces Ollie Smith, who drops to the replacements bench.

In the pack, Shane Jennings starts at openside flanker in his last game for the club, with Lewis Moody and Martin Corry named alongside him in the back row.