We can make history – Cockerill 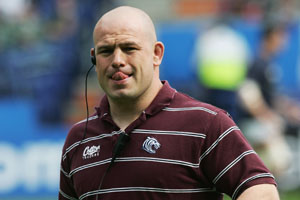 Richard Cockerill says his side are facing the form team in Europe - but know how to win in the big matches. Listen to the full interview here - 29/04/2009 15:03

This Leicester team can put themselves up with the great Tigers teams of the past if they beat London Wasps on Sunday to complete the treble.

No English club has won the Cup, League and Heineken Cup in the same season and forwards coach Richard Cockerill believes his team are on the verge of creating their own history.


He was part of the Leicester team which won back-to-back Heineken Cups in 2001 and 2002 and he believes the current crop are in with a chance of going one better this season.

“You have got to be in it to win it and we’re in it,” he said. “That momentum has built and we have built the belief that we can win all three, so if we win then this team will live in the history of this club for ever – so it is huge.

“We just have to think about playing, because every game is a big game. It has built over the season and has built on some big results.

“Winning away at Wasps with a virtual second team during the international season was a big boost for us, Thomond Park, obviously Stade Francais, Ospreys in the EDF final, beating Llanelli in the semis who were the form team of the Heineken Cup.

“This is where we wanted to be. We have a few injuries which is not ideal but it just a question of keeping them as fresh as possible and turning up with cup final mentality.

“The pressure is high but we have put that on ourselves all year so it is small margins. If our guys play at their best on the big occasion we have every chance of doing it but if they are two to three per cent off it could be different.”

The way Leicester have swept all before them so far this season brings obvious comparisons with the great side of the late nineties and early two thousands which included Cockerill in the front row.

He does not shy away from the comparison to the team captained by Martin Johnson and coached by Dean Richards.

“It is just getting the players minds focused into not thinking about the ‘what ifs,’ let us just do our jobs, get on with it and let us worry about thinking how good we are after the event which is an attitude that has served us well in the past,” said Cockerill.

“The team I was involved in did not think about the glory, they just thought about playing and hopefully this team has the same mentality.”