Charvis ruled out of play-off 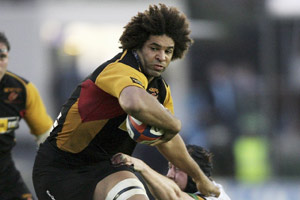 Hard-hitting Dragons back row star Colin Charvis has been ruled out of tomorrow night's Heineken Cup play-off tie with Calvisano. - 17/05/2007 13:32

Hard-hitting Dragons back row star Colin Charvis has been ruled out of tomorrow night’s Heineken Cup play-off tie with Calvisano.

Charvis, who heads Down Under with Wales on Saturday, failed a late fitness test on a knee injury and will miss the winner-takes-all clash at Rodney Parade.

But captain Kevin Morgan has boosted the Gwent region after recovering from a hamstring problem to take his place in the side.

The Dragons will be looking to erase last season’s shock loss to Overmach Parma when the face the Italian outfit tomorrow.

And coach Paul Turner said: “We are limping to the finish line of the season, but we believe we can make next season’s Heineken Cup,”

“I think we are in better shape that last year when we lost our play-off with Overmach Parma.

“But we need to go out and prove that now.