Howard: “This is for the squad” 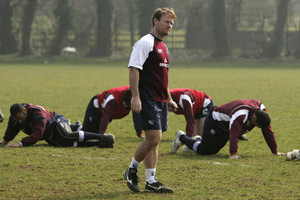 Pat Howard says the intensity of Heineken Cup rugby has tested the depths of his Leicester squad to its limits and should success come on Sunday, he will pay thanks to each and every member of his playing staff.

Howard’s side are targeting an unprecedented treble of EDF Energy Cup, Guinness Premiership and Heineken Cup this season, and with the third leg of the trilogy this weekend, Howard knows he is going to have to draw on his squad as the rigours of a long year take their toll.


And Howard, who is looking for his 50th victory as Leicester coach and his eighth straight Heineken Cup win on the bounce, paid tribute to the players who have taken his side to three Twickenham finals

“This one is for the whole squad, this is about the squad,” he said.

“This campaign has really pushed us hard, we have had to dig deep into our squad, and particularly in this [Heineken cup] competition our squad strength has been crucial.”

“There have been some crucial singular involvements from players in this year’s Heineken Cup, and these guys won’t even make the 22 on Sunday.”

Should the Tigers record a victory over London Wasps, they will have to do it without England lynch-pin scrum half Harry Ellis – who is out for six months with knee ligament damage -, Kiwi centre Daryll Gibson and Italian front-row Martin Castrogiovanni, who are both unlikely to return to action this season.

“We have some crucial injuries, Daryl Gibson looks doubtful and Harry Ellis is obviously out and they these would be starters without question. But we have the squad strength to deal with that,” said Howard, who will leave the Leicester set-up after this match to return to Australia after a two-year spell as coach at Welford Road.

In that time Howard has nurtured his squad and his prudence in ensuring there is back up in key positions is bearing fruit. Ellis’ replacement, Frank Murphy, has started half of Leicester’s Guinness Premiership matches this season and was influential in the 44-16 thrashing of Gloucester last weekend.

Howard knows all the players who wear the Leicester’s famous green and white hoped jersey have what it takes to succeed at the very highest level, and is under no illusions about the role a coach plays in helping the squad players to have faith they can step in when called upon.

“If you believe in players and show some faith in them, they show up and have come in and have done a very good this year.

“I’m extremely proud of what the players have achieved this year, and I just want to win,” he said.

“The crowd at Leicester have been magnificent, the support has been immense, and I just hope we can do them proud in Twickenham.”