Wasps after another Twickenham sting 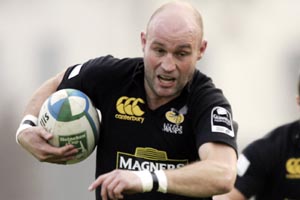 Alex King is on the brink of joining the Heineken Cup elite – but his focus is totally on trying to help London Wasps repeat their Twickenham triumph of 2004.

King and his other surviving Wasps team-mates of three years ago return to the scene of their greatest European victory on Sunday to face former double champions Leicester Tigers with the Wasps outside half one appearance short of joining the ERC Elite 50 club.

“I was told the other day that I have played in 49 Heineken Cup matches and, while reaching the 50-match mark would be a great personal achievement on such a special day, it wont mean much to have played that many games if we don’t win the really big one, the one that matters,” said the 32-year-old England international.

“However, if we win then that would certainly call for some celebration.”

Ironically, the only other players from any English club to have reached the half century of games so far are all current or former Leicester Tigers players.

King vividly remembers that 27-20 victory over Toulouse three years ago – “it is right up there alongside playing for England, it was certainly one of the greatest and most memorable and satisfying days in my rugby career.

“However, what I remember most of all was Rob Howley’s try at the end and the feeling of pure elation that we had won it and that we did not have to play extra time. I have never been so exhausted at the end of a match

“I also remember the very special atmosphere of that final, just entering the car park in the team bus and seeing all the different colours, flags and the passion of the fans … and then there is the noise from the tunnel of people and the magnitude of it all really hits home.

“The Heineken Cup is the greatest tournament we play in and the quicker we can get the future of the competition sorted out the better for everyone, including the fans.

“It provides occasions international rugby cannot generate – like our semi-final against Munster in 2004 and this season’s quarter-final against Leinster – and that is the true magic of the Heineken Cup.

“Now it is a Heineken Cup final between two English teams at Twickenham and matches certainly don’t come much bigger than that.

“And as to it being between two English sides I don’t think that favours or disadvantages either ourselves or Leicester.

“Sure we know each other well but when it is the Heineken Cup final whoever you meet are going to be top quality competition and you are well aware you are just 80 minutes away from the ultimate prize in club rugby.

“I guess our strengths are the intensity we bring to a game, the physical side and our defence – and that will be absolute key against the most attack minded and physical team in the competition.

“Leicester are very solid in the set pieces and have great strike runners in the backs – we really are going to have to be at the top of our game.”

While Leicester were getting another taste of the Twickenham atmosphere as they attended to Premiership final business, Wasps had to be content with a match among themselves on Friday night.

“Make no mistake it was a proper and intense game with no quarter asked or given,” said King. “It was good and I am glad to have got through it with this special week coming up.”