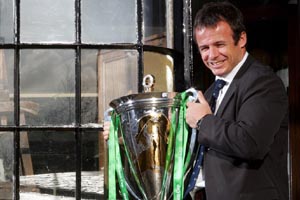 Austin Healey is backing his old club Leicester Tigers to match Toulouse and make it three Heineken Cup final triumphs when they collide with London Wasps at Twickenham on Sunday (2.30 pm). - 15/05/2007 11:10

Austin Healey is backing his old club Leicester Tigers to match Toulouse and make it three Heineken Cup final triumphs when they collide with London Wasps at Twickenham on Sunday (2.30 pm).

Healey, an ambassador for the London 07 final, won the Man-of-the-Match awards in both previous Leicester Tigers’ victories when they beat Stade Francais Paris in 2001 and Munster the following season.

“You’ve got to admire the ambition, courage and conviction displayed by this Leicester side for coming out so early and stating they were seeking to win three titles,” said the former Tigers, England and Lions scrum half.

“They backed themselves into a corner a little bit by saying that in the Press, but maybe that was a good thing. They set the bar at the highest level and gave themselves something tough to which to aspire.

“I know London Wasps didn’t make the play-offs and so they won’t have had a game for three weeks but Leicester have the momentum going into the game.

“Heineken Cup finals are the best possible matches you can play in for your club and you are certainly highly motivated for those games. You have set goals to get there so when you do get there you have to produce the goods.

“For this final we have two finely balanced teams and the standard of the tournament up to the final has been great.

“Perhaps the Irish teams have underachieved by comparison to their national side while the English sides have looked strong and it is going to take a lot for the Celts and Italians to break the English / French monopoly. However, Llanelli Scarlets came very close this year and they just need to go that final step.”

Former England captains Martin Corry and Lawrence Dallaglio will be trying to outwit and outplay one another on the pitch and how the skippers of the two clubs perform could be crucial to the outcome.

“Cozza (Corry) and Lawrence are different characters,” said Healey. “Cozza bases his captaincy purely on his performance while Lawrence has got a huge persona about him and can always motivate the team – even if he isn’t playing well.

“I rang him up the other week and told him Wasps might have a chance now that Harry Ellis is out. That riled him up a bit and he is completely excited about playing in the final and I’m sure he will be looking for another Wasps victory.

“He is showing he is as competitive as ever – especially on the floor – and he will be looking forward to strangling Leicester’s chances.

“As for Leicester, how Shane Jennings is not in the Irish team is beyond me as he has been the stand out player for Tigers for two seasons.

“Overall I can see a lot of missed touches because the wind is difficult at Twickenham – especially with the new stand – but when you know it’s the last game of the season you can forget any injuries and get out there and play your best game.”