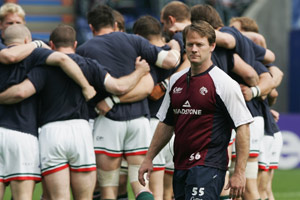 "Big teams bring the best out of you" - that was the verdict of Leicester Tigers coach Pat Howard after his side defeated Llanelli Scarlets 33-17 in the Heineken Cup semi-final on Saturday. - 22/04/2007 20:48

Leicester Tigers warmed-up for their Heineken Cup final shoot-out with London Wasps at Twickenham Stadium on Sunday, 20 May, by putting Gloucester to the sword 44-16 in the Guinness Premiership final.

It was the second time the Tigers had taken a title at Twickenham this season – they beat the Ospreys in the EDF Energy Cup Final – and they are now one step away from an unprecedented ‘treble’.

Although League champions Gloucester took the lead with a fifth minute penalty from full back Wille Walker, the Tigers took complete control in the rain and were 22-6 to the good at half-time thanks to tries from scrum half Frank Murphy, wing Alesana Tuilagi and inspirational skipper Martin Corry.

It was more of the same after the break after Walker had kicked his third penalty. Andy Goode ran in try number four, Tuilagi got a second and then back row men Shane Jennings and Lewis Moody got in on the act.

Goode ended with a match tally of 19 points, while Gloucester had a consolation try from Ryan Lamb which Walker converted.

Leicester boss Pat Howard warned his players to curtail any celebrations until after their Heineken Cup final match with London Wasps never sunday saying, “We’ve got another one to go yet.


“Winning the Premiership is a lovely moment but we are focused on that other step next week.

“We’ll go in as favourites but we have never beaten Wasps in a knockout game and we have to address that.”