Triple chasing Tigers name side for final No.2 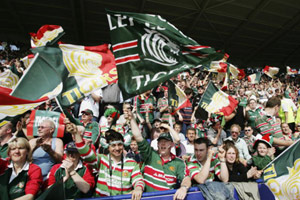 Head coach Pat Howard has announced his Leicester Tigers team for the Guinness Premiership Final against Gloucester Rugby on Saturday, the second of three Twickenham finals this season.

With Harry Ellis counted out by the knee ligament injury which ended his season during the semi-final win over Bristol last weekend, Frank Murphy starts at scrum-half. Murphy is in his first season at Tigers after a switch from Munster, but his recent form has earned a call-up to the Ireland A squad for this summer’s Churchill Cup and he has made 22 appearances in all competitions this term.


“It is obviously very disappointing for Harry, I really feel for him, but I have every confidence in Frank Murphy,” said Howard. “He has been involved in a lot of games this season and he has been playing well.”

In the forwards, Julian White starts at tighthead prop, with Louis Deacon claiming a spot in the second row alongside Ben Kay as the only two changes to the pack that helped beat Bristol last Saturday to earn a place at Twickenham.