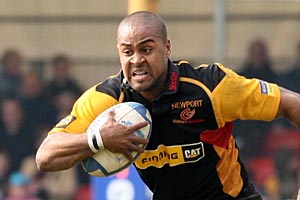 This follows the announcement by ERC’s Shareholders of a “conditional agreement” with regard to the future of the Heineken Cup and European Challenge Cup.

They will compete against the best placed Italian non qualifier at Rodney Parade on Friday, 18 May with the game kicking off at 7.45pm in front of the Sky Sports cameras. The match will be refereed by English official Rob Debney.

The Dragons have completed their Magners League programme, finishing in ninth place on 39 points and 13 clear of 10th placed Connacht who have one fixture remaining.

It will be the second successive season that the Dragons have been involved in the 24th place play-off, failing to qualify for the current Heineken Cup tournament after being beaten 24-15 by Overmach Rugby Parma at Rodney Parade.

Their Italian opposition this time will be confirmed after the second leg Super 10 semi-final matches on Saturday. The first leg results last weekend were:

As the finishing positions in the regular season will determine which of the losing semi-finalists will face the Dragons, the Italian play-off spot will be filled by either Benetton Treviso, Viadana or Calvisano. The winners of the Super 10 semi-finals will secure the two automatic Heineken Cup spots from Italy.

The finishing positions in the Super 10 (with match points earned in brackets) were:

The play-off will kick-off a bumper weekend of European club rugby action which will also sees ASM Clermont Auvergne and Bath Rugby clash in the European Challenge Cup final at the Twickenham Stoop (17.30) on Saturday with the Heineken Cup final between Leicester Tigers and London Wasps taking place at Twickenham Stadium on Sunday, 20 May (14.30).