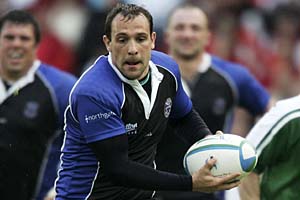 David Bory will be returning to play in France after the European Challenge Cup Final against his former team mates ASM Clermont Auvergne.

The wing, who has been at Bath Rugby for two seasons, has signed a contract with Brive, but before he leaves he hopes to put one over his countrymen by helping Bath to beat ASM Clermont Auvergne at the European Challenge Cup final at the Twickenham Stoop on 19 May, kick-off 5:30pm.


“The city is lovely, the people are magnificent,” Bory said. “We have had some good and bad results: good in the European competitions – last season we made the semi-final in the Heineken Cup, this season a final which we hope to win.”

The holder of eighteen caps for France, has a strong personal European rugby record with a total of 55 caps and 115 points in European club rugby competitions. Bory already has one European Challenge Cup medal to his name, which he won with ASM Clermont Auvergne when they defeated Bourgoin 16-35. The Frenchman will be hoping to collect another winners medal when he lines out against his former team Clermont.

Steve Meehan, the Bath Rugby Head Coach, likewise hopes that the club can send Bory back home as a European Challenge Cup-winner with Bath: “We are really looking forward to seeing David go out on a high. He has attracted the attention of the supporters over the last couple of seasons and I’m sure he’ll carry their best wishes into the final game.”

Bory made his Bath debut against Leicester in September 2005, which he marked by scoring a try, one of six he has scored in a total of 36 appearances, of which 34 were in the starting XV. Having joined from Castres-Olympique, Bory says that he will return to France a better player.