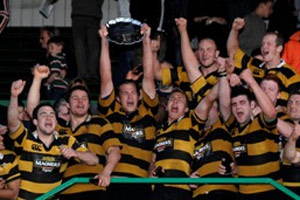 London Wasps have scored an important psychological victory over Leicester Tigers ahead of their Heineken Cup final battle by winning the Guinness A League final. - 08/05/2007 13:12

London Wasps have scored an important psychological victory over Leicester Tigers ahead of their Heineken Cup final battle by winning the Guinness A League final.

London Wasps have scored an important psychological victory over Leicester Tigers ahead of their Heineken Cup final battle by winning the Guinness A League final.


The Guinness A League is the division marked out for English clubs’ second-string line-ups, and England’s European finalists showed they have the strength in depth to dominate even at this level.

London Wasps A team won the two-legged final 64-49 to avenge their defeat from two seasons ago, and the match sets up an intriguing contest on May 20 at Twickenham.

With just 12 days until that match the winning members of the A League side will be pushing for a place in the Heineken Cup final line-up after impressing A team head coach and first team defence coach Shaun Edwards.

“I thought Dave Walder controlled the game excellently in the second half, his tactical kicking was out of the top drawer, he said.

And Edward, a former Wigan rugby league star says several players had staked a claim for first-team places next season and possibly next weekend’s European clash.

“This is a stepping-stone to the premiership,” he said. “Hopefully, some of them will have a good summer, come back bigger and stronger and really make that step up. For now, I’m just delighted that we’ve won the Grand Final and everyone can be really proud of that achievement.”

Wasps included Jonny O’Conner, Dave Walder and  Dominic Waldouck, all influential in this season’s Heineken Cup campaign, in their starting line-up, but it was tries from scrum-half Mark McMillan and full back Edd Thrower that helped Wasps to their win.

Fly-half Walder weighed in with 20 points via one conversion, one drop goal and five penalties to punish Tigers’ indiscipline.

Leicester were always second best, and despite being willed on by a crowd of 12,620 were only able to breach Wasps’ defensive line on one occasion.

Fly-half Ian Humpreys was the man to do that in the early stages of the second half.

He converted his own score and added five penalties but it was not enough to deny Wasps the silverware.