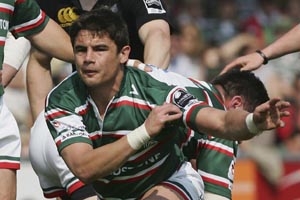 Leicester head coach Pat Howard was adamant his side’s 40-26 win over Wasps did not give his side the psychological edge over the Londoners, who they meet again in next month’s Heineken Cup final.

Leicester ran in four tries to book a home play-off semi-final against Bristol on Saturday and stay on course for a trophy treble with the EDF Energy Cup already having been claimed.

The result also ended Wasps’ hopes of a fourth Guinness Premiership title in five years. They needed to win and hope other results went their way to finish in the top four, but were overpowered after leading 14-9 after 27 minutes.


It was an impressive result but Howard was not about to get carried away by it.

“This result has no bearing on the Heineken Cup final. Two years ago we beat them here in the last round by a bigger margin and they killed us in the final two weeks later”, Howard told www.guinnesspremiership.com .

“We scored some nice tries, but they asked us a lot of questions.

“They may have had one eye on the Heineken Cup final with resting Lawrence Dallaglio and Raphael Ibanez.

“They will be fresh by the time of the Heineken Cup final.

“They will be well rested and will have players to add to the team, but we will be match-hardened.”

Leicester now take on Bristol and that gives them a chance to avenge a 30-13 defeat at Ashton Gate last week which was their only loss in their last eight games in all competition.

Howard said: “They are a good team and I think they have the best defensive record in the competition. All the games now are do or die.”

Wasps director of rugby Ian McGeechan blamed his side’s poor start to the second half for the defeat.

“We did a lot of good things up to half-time and then had a bad 10 minutes after the break.

“We missed the kick-off, put ourselves in the corner and could not get out.”