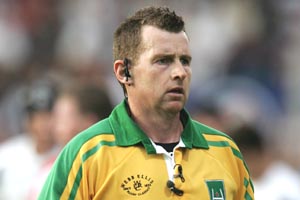 Nigel Owens was appointed to referee the European Challenge Cup final between ASM Clermont Auvergne and Bath Rugby at Twickenham Stoop on Saturday, 19 May (17.30).

Owens, who will be taking charge of his first European final, made his international debut in Japan in 2005; made his Six Nations debut earlier this season when he controlled the England v Italy match at Twickenham and took charge of the Heineken Cup quarter-final between London Wasps and Leinster last month.


Owens, who has refereed 29 European matches, will follow up his Twickenham Stoop honour by being one of the elite 12 officials named for Rugby World Cup refereeing duty.

After the European Challenge Cup final the 35-year-old Pontyberem official will warm-up for the Rugby World Cup by refereeing his first Tri-Nations Test on 21 July, when New Zealand host Australia in Auckland in a Bledisloe Cup match and a week earlier he will be in Christchurch as a touch judge for the clash between the All Blacks and Springboks.

Owens will also see action in the World Cup warm-up matches in August when he runs the line in the two matches between England and France before controlling the game between Ireland and Italy at Ravenhill on 24 August.

NOTES TO EDITORS:
(a) Match Officials for European Challenge Cup and Heineken Cup matches are nominated by an ERC Selection Panel made up of Colin High (RFU), Joel Dume (FFR) and Bob Yeman (WRU).
(b) The nominations are submitted to the ERC Match Officials Sub Committee made up of Referee Managers from the six shareholder Unions, who review and confirm the final appointments.