Leinster clean up at Irish awards 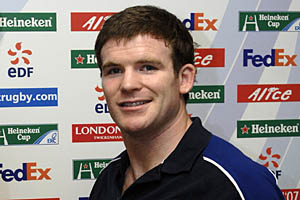 Ireland and Leinster star Gordon D’Arcy has been voted the Players’ Player of the Year by his peers at the 5th annual BT Irish Rugby Union Players Association (IRUPA) awards ceremony.

He was not the only Leinsterman celebrating – the province swept the board in all the other categories, bar none.

Shane Horgan was amongst those honoured on the Wednesday night when he picked up the Try of the Year award – for the second year running – for his try against England at Croke Park.

Despite missing out on the overall Player of the Six Nations award to Ireland skipper Brian O’Driscoll, D’Arcy was delighted to have won the IRUPA award – he is the first player to win the prestigious gong twice.

“The season gets better and better for me both personally and for the teams I have played in,” said the centre.

“This is the top rugby award in Ireland and I am delighted to have won it for the second time.

“It gives me great pleasure to win this award as it comes from the people I play with and against throughout the season.”

The awards were held to celebrate a year of individual achievements in Irish rugby in what was another successful season which saw Ireland win the Triple Crown for the third time in four years, Leinster and Munster reaching the quarter-finals of the Heineken Cup and Leinster and Ulster challenging once again for the Magners League title in the coming weeks.