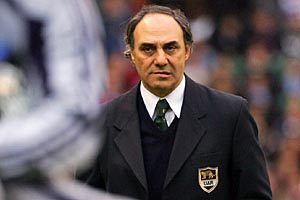 Marcelo Loffreda will take over as head coach of Heineken Cup finalists Leicester Tigers after this autumn’s Rugby World Cup.

The 47-year-old is currently national coach of Argentina but has been identified as the man to follow Pat Howard, who returns to Australia at the end of this season after two spells with Tigers and two years as head coach.

Tigers chairman Peter Tom, in announcing the appointment, said: “Marcelo has done a marvellous job in taking Argentina to the top ranks of the international game.

“He is recognised as a top-class coach and has developed a squad of quality players to the point where they have reached number six in the world rankings.”

Loffreda, who won 44 international caps for Argentina during his playing career as a centre, will be assisted at Tigers by forwards coach Richard Cockerill and the rest of the coaching staff.

Loffreda has been Argentina coach since April 2000. He was a guest of Leicester Tigers at the Heineken Cup semi-final victory over Llanelli Scarlets on Saturday and said: “The name of Leicester Tigers is renowned throughout the rugby world and to be invited to join this great club as head coach was an honour not only for me but also for the people who love rugby in Argentina.

“Leicester is a club with a wonderful history and has supporters who are passionate about ‘their’ club. I know there is also a squad of players with a hunger and drive to be the best.

“There are some exciting times ahead for us all at Tigers.”

With Pat Howard due to depart at the end of this season, forwards coach Richard Cockerill will take charge of team affairs, assisted by the rest of the Tigers coaching team, until Marcelo Loffreda’s arrival.

Marcelo Loffreda
Born: May 17, 1959 in Buenos Aires, Argentina
Rugby career: Won 44 caps and scored four tries as a centre for Argentina, also had a spell as captain.
Appointed national coach of Argentina in April 2000. Led them to the Rugby World Cup in 2003 and will be in charge for the 2007 tournament in France.