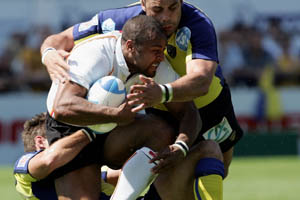 Newport-Gwent Dragons coach Paul Turner says his side can be proud of their European exploits this season despite their heavy semi-final defeat in France last weekend.

Their European Challenge Cup loss to ASM Clermont Auvergne was always going to be a tough test, but the manner in which they took to the task should be applauded, said Turner.


He said: “We can still take heart out of our never-say-die attitude even though it may have been in a losing cause.

“My players gave their all and you cannot ask much more than that from them.

Impressive wins earlier in the competition against Bayonne, Brive and Bristol took the Welsh region to within 80 minutes of a European final.

And this success in Europe could help to attract more players to Rodney Parade for next season, as the Dragons look to build a title challenge in the Magners League.

Turner plans to turn his attention on the Dragons’ squad as an area for development next season after admitting squad strength cost his side dear on Saturday.

“Defeat to Clermont shows that our strength in depth within our squad is not what it should be,” he said.

“That’s an area that we need to develop for certain.”

The form of Wales internationals Kevin Morgan, Colin Charvis and Michael Owen, and the emergence of Paul Emerick and Aled Brew, a double-try scorer against Clermont, have been key to the Dragons’ success this season.

They will be looking for a strong finish to the Magners League to ensure the improvement continues to set the tone for the next campaign.