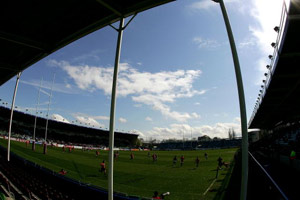 The 2007 European Challenge Cup final between ASM Clermont Auvergne and Bath Rugby will be played at the Twickenham Stoop on Saturday, 19 May (kick-off 17.30).

ERC, the tournament organisers today announced the home of NEC Harlequins would stage the final for the second successive season following last year’s thrilling final between Gloucester Rugby and London Irish that went to extra time in front of over 12,000 fans.

The Twickenham Stoop has a 12,700 capacity and Bath’s army of supporters are sure to relish the trip up from the West Country as they contest their second European Challenge Cup final while ASM’s passionate fans will add French flavour to the weekend of European club rugby in Twickenham.

In 2003 Bath, the 1998 Heineken Cup winners, went down 48-30 to London Wasps while ASM Clermont Auvergne (then called Montferrand) will be appearing in their third European Challenge Cup final.

In 1999 they lifted the trophy when they beat Bourgoin 35-16 at Stade Gerland in Lyon but were then pipped by a point when NEC Harlequins beat them 27-26 at the Madejski Stadium, Reading, in the 2004 final.

Tickets are priced at £14, £18 and £28 with concessions available at £9, £12 and £18 for under 16s, students and over 65s. Tickets will be distributed through Bath Rugby and ASM Clermont Auvergne. Full details will be released shortly.

*May be subject to handling fees.