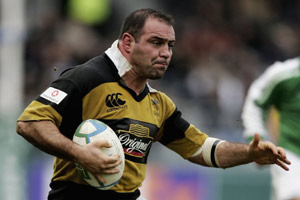 French captain Raphael Ibanez says Heineken Cup final opponents Leicester will be the hot favourites when they meet his Wasps side at Twickenham on May 20. - 23/04/2007 09:02

French captain Raphael Ibanez says Heineken Cup final opponents Leicester will be the hot favourites when they meet his Wasps side at Twickenham on May 20.

He is celebrating reaching the final of Europe’s top club competition for the first time, after being part of a Castres team who lost to Munster at the semi-final stages five seasons ago.

“Honestly Leicester will be hot favourites for that game,” he said, looking ahead to the final.

“They are the best side in the Premiership and in all of Europe this year as well so it will be a massive game but we have a role to play.”

Ibanez’s Wasps team hit back with 30 points after going down 13-0 to Northampton in their semi-final to show the 2004 champions are in the mood to repeat their success.

“It is a great feeling. We did not start very well in the first half but we reacted well as a team and this is what matters in big games like this,” said Ibanez.

“We were really focussed before the game but our discipline cost us a lot, especially me giving away a penalty, but then we could not play the way we wanted but all in all that was a good performance from Wasps.”