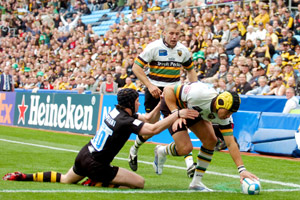 Even though his team headed Wasps for much of the semi-final, the former All Black believes Lawrence Dallaglio’s team can beat Leicester in the Twickenham showpiece.

“They can beat Leicester, any team can win on final day. It will be a great final in front of 80,000 plus and it will be a close one I say,” he predicted.

“Class told under pressure today, we started falling off tackles and gave them easy run-ins, but having said that they ran with passion and showed the attitude of a winning side and they finished off really well.”

The Saints went 13-0 up, but Wasps then took a grip on the game to score 30 unanswered points to shatter Northampton’s dreams of making the Heineken Cup final to make up for their struggles in the domestic league.

“We put the early pressure on them and then spent the second 20 of the first half defending which was not really good enough,” said skipper Reihana.

“We said at half-time we would start again but we did not really do that, we were under too much pressure and Wasps turned that into points.

“We did not stick to our plan as we did on the first half and if we had done that we could have been in with a shot of winning the game.

“We know we can play better than that, we played in patches to our potential. We are very disappointed, it was a lifetime opportunity.”