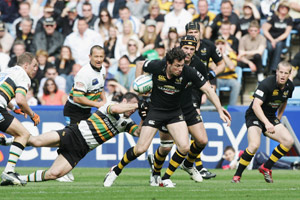 Ian McGeechan, who has had coaching success at virtually every level, now has a chance to add the Heineken Cup to that list when the Wasps Director of Rugby takes his side to Twickenham next month.

And McGeechan desperately hopes the Heineken Cup will survive in its current format for next season.

“We were delighted to win because when we started to get the basics going well we started to build some momentum and get on the front foot,” he said.

“In the second half we were exceptional and defensively huge yet again not giving away any soft points.

“Getting into the final of the Heineken Cup is really special and I can’t see any reasonable men not coming to an agreement there is so much to lose.

“I would be very disappointed and surprised, if the situation was not resolved before the end of the season.

Captain Lawrence Dallaglio, who lead London Wasps to Heineken Cup final glory at Twickenham in 2004, echoed that sentiment – “I can’t speak highly enough if this competition,” he said.

“We now have a final between the two English teams who have dominated the professional era – its going to be one hell of a game.”