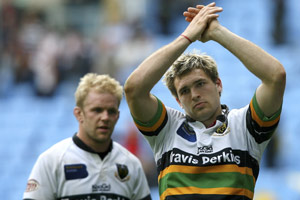 Northampton Saints coach Paul Grayson believes a packed Twickenham stadium will witness “a hell of a final” when London Wasps meet Leicester Tigers on Sunday, 20 May.

Grayson, a Heineken Cup winner with Saints at Twickenham in 2000, paid tribute to the fitness and power of Wasps after seeing his side lose a 13 point lead in the second Heineken Cup semi-final at Coventry’s Ricoh Arena.


“We got 29 points against Wasps last week and we knew it would take that and more to win in the semi-final. Unfortunately we got stuck at 13,” said Grayson.

“Having got off to a brilliant start we simply couldn’t get our hands on the ball again.

“It’s going to a hell of a final and I think maybe Leicester Tigers will start as favourites. Their forward display against a good Scarlets team was overwhelming.

“Wasps are physically very very fit and they have some big players.

“They certainly won’t fall away physically but they may have to go up a notch tactically.”

Saints skipper Bruce Reihana admitted to being “very, very frustrated” at seeing his side lose their 13 point advantage early on.

“We didn’t fire a lot of shots at them an they put us under a lot of pressure,” said Rehania

“There were lots of things we wanted to try and do but we simply couldn’t get our hands on the ball.”