Scarlets will be back vows Davies 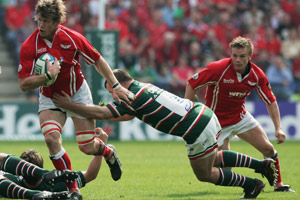 Llanelli Scarlets coach Phil Davies refused to be downhearted after his team lost their season long unbeaten record in the Heineken Cup - and missed out on reaching the final for the third time. - 21/04/2007 18:04

Llanelli Scarlets coach Phil Davies refused to be downhearted after his team lost their season long unbeaten record in the Heineken Cup – and missed out on reaching the final for the third time.

“We are obviously devastated at losing, but this is part of a learning curve for this team. We want to be playing at this level season in, season out and we’ll be back,” said Davies.


“I’ve got a good squad of players and we should have a good few years together, so I hope there is a lot more to come from them. We will get over this defeat – and get over the line in the Heineken Cup some time in the future.

“I’m not going to criticise my players for the errors that were made because I thought they did what we asked them to do, which was to go out there and have a go. I thought the game was a great spectacle and we were excellent in patches.

“But fair play to Leicester Tigers – they are a magnificent club and they were very clinical. Good luck to them.”

“We could have played better and we are more disappointed for our magnificent fans than we are for ourselves,” said Easterby.

“I was sorry we couldn’t win it for them and for the Llanelli President, Ray Gravell, who missed the game because he is in hospital.

“We lost a few crucial balls when we were in the ascendancy and that’s what made the difference.”