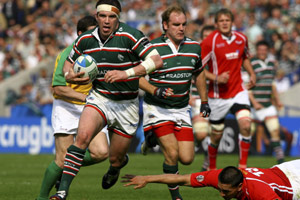 Leicester Tigers skipper Martin Corry maybe relishing the prospect of another trip to a major Twickenham Stadium final, but he has warned his players and fans they have won nothing yet..

Having told his players that winning the EDF Energy Cup final the previous weekend would not make the season a complete success, he now wants to ensure they don’t rest on their laurels having taken Llanelli Scarlets’ unbeaten European record this season in the semi-final.

“I was delighted we came out on top, even if it wasn’t the perfect performance. It’s great to be going back to Twickenham for another final, but we’ve not won anything yet,” said Corry.

“It’s going to be a great day out for the club, but we face a huge challenge whichever team gets there. It could be an all-Midlands derby against the Saints or a clash with our old sparring partners Wasps – I don’t mind whoever it is because we will be there.

“I thought the key to our victory was our defence and our work rate. Our defensive work was outstanding.

“The Scarlets are a top quality side and they played at real pace. It was a fight all the way against them.”

While Corry carried off the Heineken Man of the Match award for his rousing display it was outside half Andy Goode who picked up most of the Tigers’ points. He picked up a try in the first half and ended with 23 points.

“It was nice to eventually get a win at the Walkers Stadium and now we are on our way to another final at Twickenham,” said Goode.

“It was a case of third time lucky for us here and it feels great to finally win at this ground. We changed dressing rooms this time and there were a few little things that made a big difference.

“The forwards really stood up and we hit back as soon as they went ahead.”