Scarlets fans to be 16th man 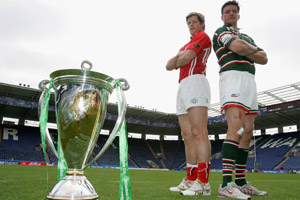 Llanelli Scarlets skipper Simon Easterby is hoping the vocal power of the Welsh fans will sing his side to a famous victory at the Walkers Stadium in Saturday's first Heineken Cup semi-final. - 20/04/2007 18:42

Llanelli Scarlets skipper Simon Easterby is hoping the vocal power of the Welsh fans will sing his side to a famous victory at the Walkers Stadium in Saturday’s first Heineken Cup semi-final.

More than 100 coaches are leaving the Scarlets region on Saturday morning to back their team against the mighty Leicester Tigers.

The Tigers, who are chasing a Grand Slam over the Welsh regions having already beaten the Dragons, Blues and Ospreys this season, have sold 17,000 tickets for the expected 32,000 sell-out game, while the Scarlets have shifted more than 11,000.

“We may be slightly outnumbered, but Welsh fans have a strong tradition of singing their hearts out at big matches and I’m sure you will hear them,” said Easterby.

“I’m hoping the Scarlets fans will be able to drown out the Tigers supporters. It’s down to us to give them something to shout about on the pitch.”

The Scarlets come into their third Heineken Cup semi-final as the only remaining unbeaten side and will be looking to reach their first European final.

The Tigers have already beaten them at this stage once before, but Easterby is banking on it being third time lucky.

“The track looks fast and the Walkers Stadium is going to provide a magnificent setting for this game. I think it might suit our style,” said Easterby.
“The butterflies are already there in the stomach and it is guaranteed to be a fantastic atmosphere.”
Tigers will be without Italian prop Martin Castrogiovanni, but are otherwise at full strength for a game that could lead them into their second major final of the season. Last weekend they won the EDF Energy Cup at Twickenham when they beat another Welsh team, the Ospreys.
“The Walkers Stadium is a great venue and we’re going to play on a great pitch. It’s going to be a tremendous day for everyone concerned,” said Tigers skipper Martin Corry.
“The most important thing is to ensure that we turn up and give it our all – and that’s exactly what we are going to do.”