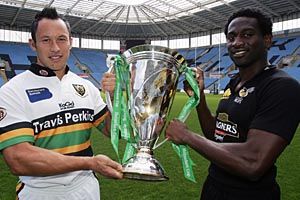 “It’s a magnificent stadium and far more intimate than some of the other football grounds we’ve played at. Once we get our 8,000+ fans in here on Sunday this place will be buzzing,” said Reihana.

“There is plenty of grass on the pitch and the atmosphere is going to be fantastic. And if the weather holds up it is going to be white hot out here when we start.

“The nerves have kicked in already and everyone at Northampton is excited about this game. There is a huge prize for the winners at the end and we want it.

“We will be giving everything we’ve got to give. If it is good enough then we will go home happy, but if it isn’t we will just have to move on.

“The important thing is that we don’t leave anything in the dressing room. It is going to be one of the biggest rugby weekends of our lives and we intend to make the most of it.

“It is a perfect setting and we want to give our fans something to shout about.”

Sackey is looking to step back into the big time after 13 frustrating weeks on the sidelines with a knee injury. He proved he is back to peak fitness with a try scoring return to action in last weekend’s league win over Northampton, but realises it will be a step up in intensity on
Sunday.

“I was greatly looking forward to the game before coming to the Ricoh, but now I’ve been out in the middle and got a flavour of what the atmosphere is going to be like I can’t wait for Sunday to come,” said the England international.

“I just hope that the coaches will give me the chance to play here because it really is a great stadium.”

Wasps director of rugby Ian McGeechan has named a 24 strong squad for the game, while his Northampton counterpart Paul Grayson has announced 28 names. Both teams will be formally declared by 12 noon on Friday.

The main injury doubts surround the two outside halves, Wasps’ Alex King and Saints’ Carlos Spencer. King is likely to be available, while ex-All Blacks star Spencer is rated 70-30 against by coach Grayson.