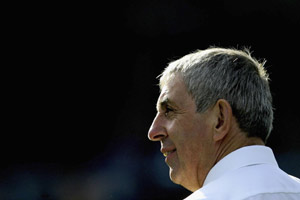 Ian McGeechan has won most things at club and international level in a successful playing and coaching career, but still he wants to fill one of the remaining gaps by winning the Heineken Cup for the first time.

He has been on successful Lions tours as a player and coach, won the Grand Slam with Scotland and guided his London Wasps side to the Powergen Cup last season – but he describes Sunday’s semi-final against former club Northampton as hugely important to him.

.. He was in charge at Northampton in the 1990’s, but returned to Scotland before the Saints lifted the Heineken Cup in 2000 with many of the players he had coached, including outside half Paul Grayson who is now the boss at Franklins Gardens.

“To be involved at a club that can get the best trophy that is available to a club in the Northern hemisphere would mean a huge amount,” admitted McGeechan.

“There is more excitement because as a club we want to measure ourselves against the best clubs in Europe so to that extent it is great to get through to the knock-out stages, we have not done so for three years.

“We are playing the top group of clubs in the Northern hemisphere and that gives you that bit of edge and excitement you do not get in the day to day rugby.

“Everybody strives to get to the knock-out stages of the Heineken Cup but then you are just 80 minutes from staying in or going out.”

It gives the game an extra edge that is is against a team where McGeechan used to be in charge. He also describes current Northampton coach Grayson as the player who was his eyes and ears on the pitch when the pair were together at the Saints.

“There is always a bit of me that will stay at Northampton but I have moved on to Wasps and it is everything about the players and people and we have got some great individuals and a good set up,” said McGeechan.

“It is all important to us to achieve something as a group of players with a Wasps shirt on and that to me is everything now.

“Northampton are a better team than their position in the Premiership shows. There are players there who are genuine game-winners, with a good, physical pack and some talent behind as well so they pose huge threats and are a side that is of a very high standard.”