All roads lead to London 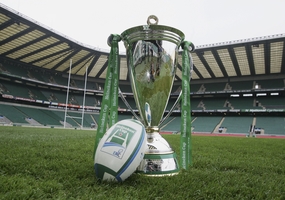 The 12th Heineken Cup final being played at Twickenham Stadium on Sunday, 20 May, is on course to be watched by a world record crowd for a club rugby match.

The redevelopment of Twickenham has increased the stadium capacity to 82,000 and already 64,000 tickets – 56,000 snapped up on general sale and 8,000 allocated to ERC’s stakeholders, family of partners and to corporate hospitality – are accounted for at the climax of the European club rugby season.

And with the finalists sharing the remaining 18,000, a full stadium is the target with the current tournament record of the 74,600 who were at the Millennium Stadium in 2002 when Leicester Tigers beat Munster set to be shattered.

The current world club rugby record mark is the 79,604 who went through the Stade de France turnstiles on 26 January, 2007, to watch the Top 14 clash between Stade Français Paris and Toulouse.

“The huge demand for Heineken Cup final tickets is a great endorsement of the tournament and proves that the Heineken Cup final has become of the one of the premium events in the European sporting calendar,” said ERC Chief Executive Derek McGrath.

“The public allocation of tickets have been on sale since last May and were sold-out prior to the knock-out stages and now we are down to the last four it is likely the only tickets left will be the 18,000 set aside for the finalists.

“Last year’s final between Munster and Biarritz Olympique was another magical occasion at the Millennium Stadium but the new Twickenham Stadium is not only set to give us a tournament attendance record, but also a possible world record crowd for a club match.

“We have four great teams left in the tournament and it looks as though we will be close to the 32,000 capacity at the Walkers Stadium on Saturday. We are also looking at a crowd of over 15,000 for the Sunday clash at the Ricoh Arena.

“It means that if anyone wants to guarantee themselves the thrill of watching Heineken Cup action this season then the best bet is to come to Leicester or Coventry this weekend.”

A total of 28,000 tickets have gone to fans for this Saturday’s semi-final showdown between Leicester Tigers (17,000) and Llanelli Scarlets (11,000) with the match approaching the Walkers Stadium capacity of 32,000.

When the Tigers played Toulouse in the 2005 semi-finals at the home of Leicester City the match attracted a crowd of 31,883.

On Sunday the Heineken Cup will witness only the second tournament all-England semi-final when London Wasps and Northampton Saints clash at the Ricoh Arena in Coventry.

The first such occasion, when Leicester Tigers met Gloucester at Vicarage Road, Watford, in the last four in 2001, was watched by 14,010. So far Saints are winning the ticket sales with 7,500 with Wasps selling 5,500. Coventry based fans are also taking the opportunity to sample the Heineken Cup experience in its first visit to the Ricoh Arena.

Tickets for the London Wasps v Northampton Saints semi-final are available through the Ricoh Arena and through www.ticketmaster.co.uk